Scientists say that the tsunami that hit Japan in 2011 was a thousand-year event. A monster wave might strike Hawaii about as often. 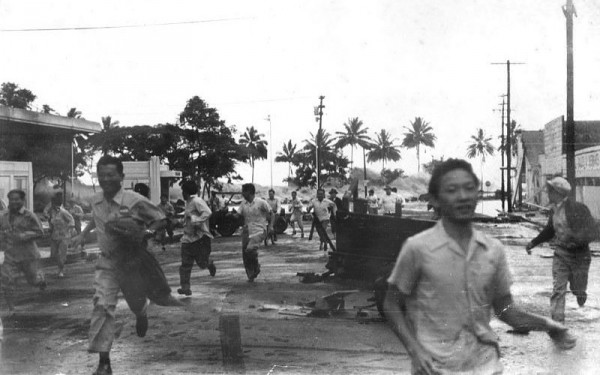 Hawaiian residents flee the waves, in what was Hawaii most destructive tsunami in recent history, in 1946. Hawaii’s evacuation maps were based in part on the 1946 tsunami, but have been revised thanks to a new study. Image via USGS

The most destructive tsunami in Hawaii’s recent history took place in 1946. Scientists now have evidence, however, suggesting that at least one colossal tsunami, some three times larger than the 1946 tsunami and larger than any in Hawaii’s known history, struck the islands in the past. These scientists say a similar mammoth tsunami could strike again and that such an event is likely to occur about every thousand years. The evidence comes the form of a mass of marine debris, discovered in a giant sinkhole in the Hawaiian Islands. Rhett Butler, a geophysicist at the University of Hawaii at Manoa, is lead author of the new study, which was published online in Geophysical Research Letters on October 3, 2014.

There’s enough debris in a sinkhole on the island of Kauai to fill nine shipping containers with ocean sediment. The scientists calculate that a wall of water up to nine meters (30 feet) high would be needed to create this much debris. They estimate that this monster tsunami surged onto Hawaiian shores about 500 years ago.

They say a 9.0-magnitude earthquake off the coast of the Aleutian Islands probably triggered the mighty wave.

Tsunamis of this magnitude are rare events. An earthquake in the eastern Aleutian Trench big enough to generate a massive tsunami like the one in the study is expected to occur once every thousand years. Thus, in any given year, there is a 0.1 percent chance of it happening – the same probability as the 2011 Tohoku earthquake that struck Japan, according to Gerald Fryer, a geophysicist at the Pacific Tsunami Warning Center in Ewa Beach, Hawaii.

Nevertheless, the new research has prompted Honolulu officials to revise their tsunami evacuation maps to account for the possibility of an extreme tsunami hitting the county of nearly 1 million people. The new maps would more than double the area of evacuation in some locations, according to Fryer. The county hopes to have the new maps distributed to residents by the end of 2014. 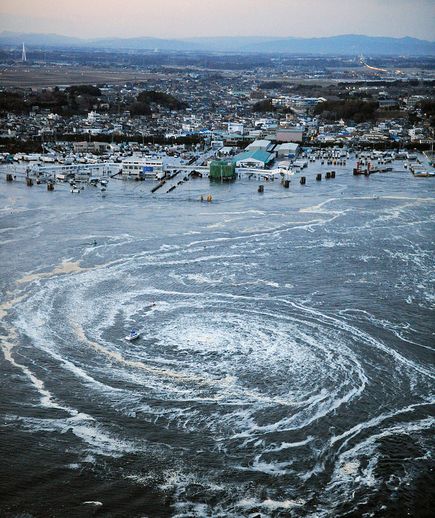 The world watch on television as the March 11, 2011 tsunami in Japan created this mighty whirlpool off the coast of Oarai in Japan. An 8.9-magnitude earthquake created the tsunami. 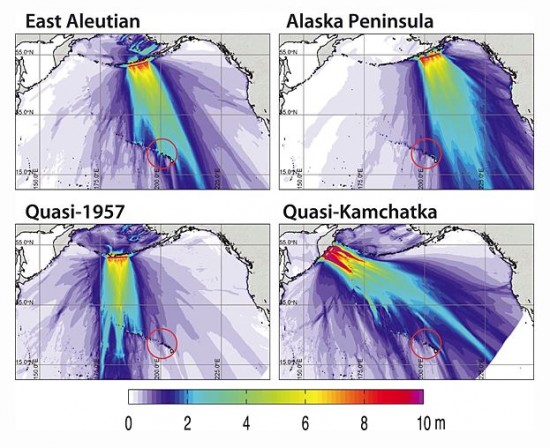 The researchers simulated earthquakes with magnitudes between 9.0 and 9.6 originating at different locations along the Aleutian-Alaska subduction zone, and found that the unique geometry of the eastern Aleutians would direct the largest post-earthquake tsunami energy directly toward the Hawaiian Islands. The red circles are centered on Kaua‘i and encircle the Big Island. Image via Rhett Butler

Bottom line: Scientists say that the tsunami that hit Japan in 2011 was a thousand-year event. A monster wave might strike Hawai’i about as often. The evidence comes from a giant debris pile discovered in the Hawaiian Islands.