Economic losses from earthquakes and natural disasters peaked in 2011

The earthquake analysis – released in January 2012 – came from the Center for Disaster Management and Risk Reduction (CEDIM) in Germany. According to their report, earthquakes and their consequences, including tsunamis and landslides, caused damages of $365 billion U.S. dollars. More than half of that was from the March 2011 Tohuku earthquake and tsunami.

Going back to the CEDIM repot, in 2011 earthquakes alone and their consequences, such as tsunamis, landslides, and ground settlements, caused a damage of $365 billion U.S. dollars. According to the CEDIM analysis, 20,500 people died, about a million people lost their homes.

The earthquake near Christchurch, New Zealand, in February 2011 caused $20 billion in losses, said the CEDIM. Large economic losses also resulted from the earthquakes in the Turkish region of Van, in the region of India-Nepal-Tibet, in the Chinese provinces of Yunnan and Xinjiang, and in the U.S. state of Virginia.

Worldwide, at least 133 earthquakes occurred in 2011, during which people died, were injured or lost their homes or which caused immense damage to property. Most often, i.e. 27 times, earthquakes took place in Japan. These were mostly aftershocks of the Tohoku earthquake. China was affected 20 times, Turkey 18 times. Including the aftershock near Christchurch, New Zealand was hit by 17 earthquakes, the CEDIM said.

In 2011, 20,500 people died as a result of earthquakes, tsunamis, or other consequences. Statistically speaking, this is below the average of the past years. More than 1 million people lost their homes. For comparison: The devastating earthquake on Haiti in 2010 caused about 137,000 casualties, between one and two million people lost their homes. In 2011, the earthquakes and their side effects destroyed or damaged more than 1.7 million buildings, of these, more than one million in Japan alone. 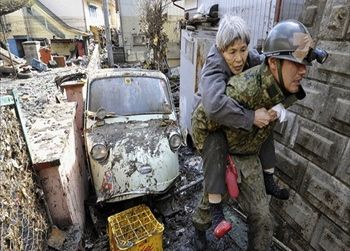 Bottom line: According an analysis by the Center for Disaster Management and Risk Reduction Technology (CEDIM) released in January 2012, the year 2011 had the highest global economic losses due to earthquakes on record, In 2011, earthquakes and their consequences, such as tsunamis, landslides, and ground settlements, caused a damage of 365 billion U.S. dollars. According to this analysis, 20,500 people died, about a million people lost their homes.