The perfectly-preserved scene is from the mid-Cretaceous, when flowering plants were changing the face of the Earth forever, adding beauty, biodiversity and food. 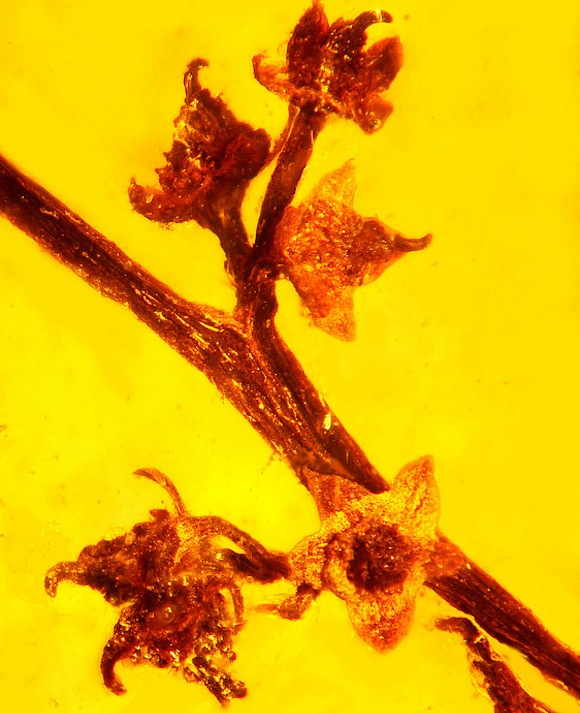 A 100-million-year old piece of amber has been discovered which reveals the oldest evidence of sexual reproduction in a flowering plant – a cluster of 18 tiny flowers from the Cretaceous Period – with one of them in the process of making some new seeds for the next generation.

The perfectly-preserved scene, in a plant now extinct, is part of a portrait created in the mid-Cretaceous when flowering plants were changing the face of the Earth forever, adding beauty, biodiversity and food. It appears identical to the reproduction process that “angiosperms,” or flowering plants still use today.

Researchers from Oregon State University and Germany published their findings on the fossils in the Journal of the Botanical Institute of Texas.

The flowers themselves are in remarkable condition, as are many such plants and insects preserved for all time in amber. The flowing tree sap covered the specimens and then began the long process of turning into a fossilized, semi-precious gem. The flower cluster is one of the most complete ever found in amber and appeared at a time when many of the flowering plants were still quite small.

Even more remarkable is the microscopic image of pollen tubes growing out of two grains of pollen and penetrating the flower’s stigma, the receptive part of the female reproductive system. This sets the stage for fertilization of the egg and would begin the process of seed formation – had the reproductive act been completed.

“In Cretaceous flowers we’ve never before seen a fossil that shows the pollen tube actually entering the stigma,” said George Poinar, Jr., a professor emeritus in the Department of Integrative Biology at the OSU College of Science. “This is the beauty of amber fossils. They are preserved so rapidly after entering the resin that structures such as pollen grains and tubes can be detected with a microscope.”

The pollen of these flowers appeared to be sticky, Poinar said, suggesting it was carried by a pollinating insect, and adding further insights into the biodiversity and biology of life in this distant era. At that time much of the plant life was composed of conifers, ferns, mosses, and cycads. During the Cretaceous, new lineages of mammals and birds were beginning to appear, along with the flowering plants. But dinosaurs still dominated the Earth.

“The evolution of flowering plants caused an enormous change in the biodiversity of life on Earth, especially in the tropics and subtropics,” Poinar said.

“New associations between these small flowering plants and various types of insects and other animal life resulted in the successful distribution and evolution of these plants through most of the world today,” he said. “It’s interesting that the mechanisms for reproduction that are still with us today had already been established some 100 million years ago.”

The fossils were discovered from amber mines in the Hukawng Valley of Myanmar, previously known as Burma. The newly-described genus and species of flower was named Micropetasos burmensis.