How to find Comet Garradd in December 2011

Search for Comet Garradd before dawn and in the eastern sky, starting around the December solstice. Look for it with binoculars near the star Lambda Herculis in the constellation Hercules.

We in the Northern Hemisphere can’t see Comet Lovejoy, which is now gracing Southern Hemisphere skies. But, if you’re up for a challenge, grab your binoculars and head for a clear, dark sky to see Comet C/2009 P1 Garradd. It’s the northern sky’s most conspicuous comet now, approaching sixth magnitude in brightness. It’s visible through binoculars, even though the comet is quite faint. Your best bet for catching this comet will probably come in the last week of December, as Comet Garradd pairs up with the visible star Lambda Herculis in a moonless, predawn sky.

The last time I looked, Comet Garradd looked like a ghost of a fuzzball in my 10×50 binoculars, with no hint of a tail. All the same, it’s a great thrill to catch this creature of the wild roaming in the wilderness of the solar system.

This comet is predicted to remain at about the same brightness until March 2012. The magnitude isn’t expected to change greatly over the next several months, though Comet Garradd will probably peak in brightness in February 2012.

And there’s more good news. Until now, Comet Garradd has been traveling relatively rapidly across our sky, passing many constellations along the way, making it a hard target to track for casual viewers. Now, though, the comet has settled into a region of the sky near a noticeable star pattern, or asterism – the famous Keystone asterism of the constellation Hercules. Comet Garradd will be in front of Hercules from now until February 2012. So finding Hercules – and its Keystone star pattern – is your ticket to seeing Comet Garradd.

Comet Garradd transitions from evening to morning sky in December

This month, the search for Comet Garradd is somewhat complicated by the fact that it transitions from the evening to morning sky in December 2011. At mid-northern latitudes in early December, the comet sits low in west at nightfall, sets beneath the horizon by early evening, and rises over the eastern horizon before dawn.

The constellation Hercules and its Keystone asterism enable you to star-hop to Comet Garradd in both the evening and morning sky. The Keystone of Hercules sets after the comet in the evening sky, yet rises before the comet in the morning sky. Find an unobstructed western horizon for evening viewing, or an unobstructed eastern horizon for the predawn showing. 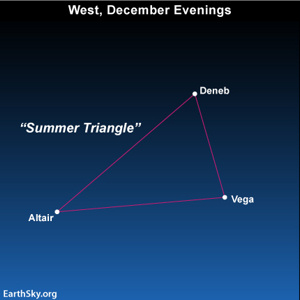 Vega is your guide star to the Keystone asterism in the constellation Hercules.

How to find the Keystone in Hercules

As darkness falls, look below or to the lower right of Vega to locate the Keystone in the western sky. (See chart below.) Or if you’re up before dawn, look eastward to find the Keystone asterism to the upper right of Vega. Whether you’re looking for this comet in the evening or morning sky, the four-sided figure of the Keystone serves as your faithful guide to Comet Garradd. Once you know the Keystone, branch out from there to fill out the stick figure of Hercules.

See the Summer Triangle in west on winter evenings

Comet Garradd in the evening sky 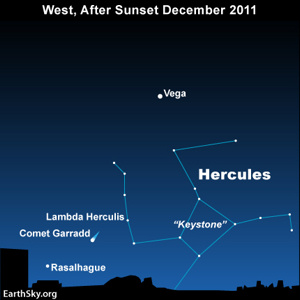 Star Vega, the Keystone of Hercules and Comet Garradd in the December 2011 evening sky.

Our sky chart shows the stars in the west-northwest sky as they appear at roughly 7 p.m. local time in early December, or at dusk by the month’s end. We show the comet’s place for early December, in between the second-magnitude star Rasalhague, the brightest star in the constellation Ophiuchus, and the faint fifth-magnitude star Lambda Herculis of Hercules.

Identifying Lambda Herculis will greatly assist you in locating Comet Garradd in December. It’s a faint star yet visible to the unaided eye in a dark, moonless sky. If you can see Lambda Herculis, that increases your chances of catching the comet with binoculars. Comet Garradd moves toward the star Lambda Herculis throughout the month, and sweeps within a hairsbreadth of this star in late December.

Because the moon is waxing toward full during the first ten days of December, that makes the first third of the month a rough time for spotting Comet Garradd in the evening sky. By the time that the moon leaves the early evening sky around December 12, the comet will have sunk closer to the glare of evening dusk.

But don’t despair! Although the stars set in the western evening sky some four minutes earlier with each passing day, or one-half hour earlier with each passing week, these same stars also rise into the eastern morning sky four minutes earlier daily, or one-half hour earlier weekly. So the morning sky might be your better bet for seeing Comet Garradd in December.

Comet Garradd in the morning sky 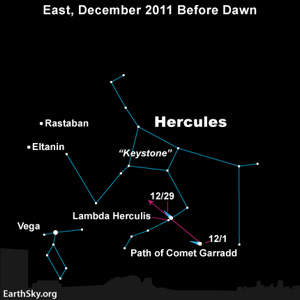 Star Vega, the Keystone of Hercules and Comet Garradd in the December 2011 morning sky.

Our sky chart shows the east-northeast sky for around 6 a.m in early December, or 4 a.m. by the month’s end. Brilliant Vega shines in the northeast sky, below the second-magnitude stars Rastaban and Eltanin, the two brightest in the constellation Draco the Dragon. Seek the comet about two fist-widths to the right of Vega and one fist-width below the Keystone. Hold your fist at an arm’s length away.

Moonlight will flood the predawn sky from about December 8 to 20. As fortune would have it, though, the last week of December presents the best chance to catch this elusive comet. At that time, there will be no moon to obscure the predawn sky. What’s more, Comet Garradd will rise earlier and climb higher into the morning darkness. Look for the comet to swing very close to the star Lambda Herculis for several days, centered on December 29. Aim your binoculars at this star … and who knows … you may see this faint fuzzball of a comet nearby.

By the way, the star Lambda Herculis and Comet Garradd will share the same binocular field of view from around mid-December till early January.

Star-hopping with binoculars to find the comet

Before looking for any comet, it’s best to practice star-hopping to deep-sky objects with binoculars. Since you’ll probably be using the Keystone to star-hop to Comet Garradd, how about star-hopping to the Hercules globular star cluster (Messier 13) right off the bat? Through binoculars, the Hercules cluster looks like a dim and possibly fuzzy star. With a good telescope, you can begin to appreciate the Hercules cluster for what it really is – a globe-shaped stellar city teeming with hundreds of thousands of stars.

The Hercules cluster (Messier 13) is only somewhat brighter than sixth magnitude, which means it’s just barely bright enough to perceive with the unaided eye. You need a clear, dark night and eagle-eyed vision to see this sixth-magnitude object as a faint speck of light. More than likely, you’ll need binoculars to spot the Hercules cluster.

It’ll be good practice to observe this cluster with binoculars time and time again before searching for a comet that may or may not reach sixth magnitude in brightness. Once you’ve become accustomed to finding the Hercules cluster (Messier 13), try finding Hercules’ fainter globular star cluster, Messier 92. At 6.5 magnitude (the higher the magnitude, the dimmer the object) Messier 92 is somewhere around 1.5 to 2 times dimmer than Messier 13.

Comet Garradd will pair up with the star Lambda Herculis on December 29, 2011, and M92 on February 3, 2012. So think photo opportunity! If you’re able to locate this star or Messier 92, you can use either one to find Comet Garradd on or near those dates.

Sky chart of the constellation Hercules, including M13 and M92

Use the bright star Vega to find the Keystone of Hercules, and then use the Keystone to locate M13, the great Hercules cluster.

Tracking down and spotting Comet Garradd with binoculars won’t come easily. I first saw it as a small, faint fuzzball in my 10×50 binoculars on the evening of October 23.

You’ll need a good familiarity with the constellation Hercules and a detailed sky chart to find this comet. (Click here for another sky chart.) Plus, you’ll need a dark, moonless night and perhaps 10 to 20 minutes in the dark to give your eyes time to adapt. EarthSky reader Willow Lepanto sums it up most eloquently: “love chasing something untouchable … and uncatchable.”

But if you’re up for the challenge, Comet Garradd may be yours to behold on dark, moonless nights in December of 2011 and winter of 2012!