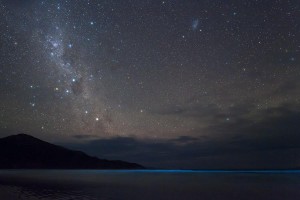 *The blue glow of life* via Colin Legg, who said, I ventured down to the Prom Thursday and Friday night to enjoy some coastal scenery before my long trip back to Perth. Thursday was warm with light northerlies, while Friday night was cooler with southerlies. The Prom is well known for bioluminescence…they have a fact sheet on it at the visitors centre. So I pointed my camera out to sea both nights, hoping to capture some of the magic. This is Thursday nights view before clouds intervened. On Friday the blue was gone.

Thank you! Your submission has been received!
Oops! Something went wrong while submitting the form.
END_OF_DOCUMENT_TOKEN_TO_BE_REPLACED