Will you see moon and Venus August 3? 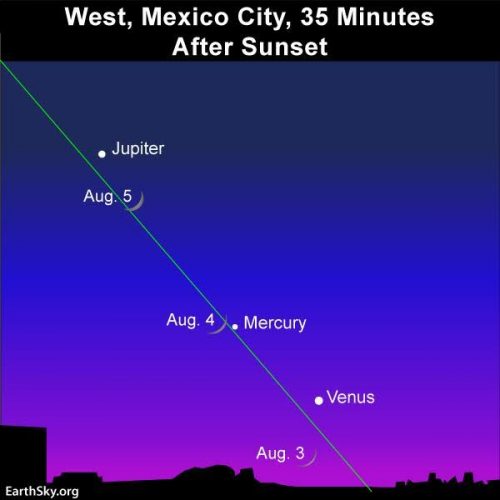 Tonight – August 3, 2016 – no matter where you are on the globe, you might catch the whisker-thin waxing crescent moon and Venus. But you’ll have better luck if you’re more southward and westward on the globe … keep reading to understand what that means.

Notice the out-of-the-ordinary sky chart at the top of this post. We usually make our charts for mid-northern North American latitudes. Today, we show the sky from Mexico City, to indicate that – as you go southward on Earth’s globe – the moon and Venus are more likely to be seen after sunset on this date. Even at Mexico City’s latitude – which is also the latitude of, for example, Hawaii (20o North latitude) – binoculars will come in handy for sweeping low in the western sky shortly after the sun goes down.

So southerly latitudes are best for seeing the moon and Venus on August 3.

And westerly latitudes – as measured from the International Date Line – are best. In other words, the Americas will have a better chance of seeing the moon and Venus on this date than Africa, Asia, Australia/Oceania or Europe. That’s because, by the time the sun sets in the Americas, the moon will be farther from the sun’s glare than it was for those further east on Earth’s globe.

Click here for recommended almanacs; they can help you find the setting times for the moon and Venus in your sky.

We expect our friends in Indonesia, Australia and New Zealand to observe the close snuggling of the moon and Venus after sunset on August 4.

Meanwhile, we in the Americas will be seeing Mercury near the moon on August 4.

No matter where you are in the world, binoculars will come in handy for spotting the moon, Venus and Mercury at dusk, though all of these worlds may well be visible to the eye alone at southerly latitudes. After all, the moon and Venus rank as the second-brightest and third-brightest celestial bodies, after the sun, and set later after sundown at these more southerly latitudes.

The moon’s entry into the evening sky today (or in the next day or two) will enable those in both the Northern and Southern Hemispheres to locate the five bright planets in the August 2016 evening sky.

Bottom line: If you do spot the moon on August 3, 2016, the bright object near it is Venus.

Thank you! Your submission has been received!
Oops! Something went wrong while submitting the form.
END_OF_DOCUMENT_TOKEN_TO_BE_REPLACED