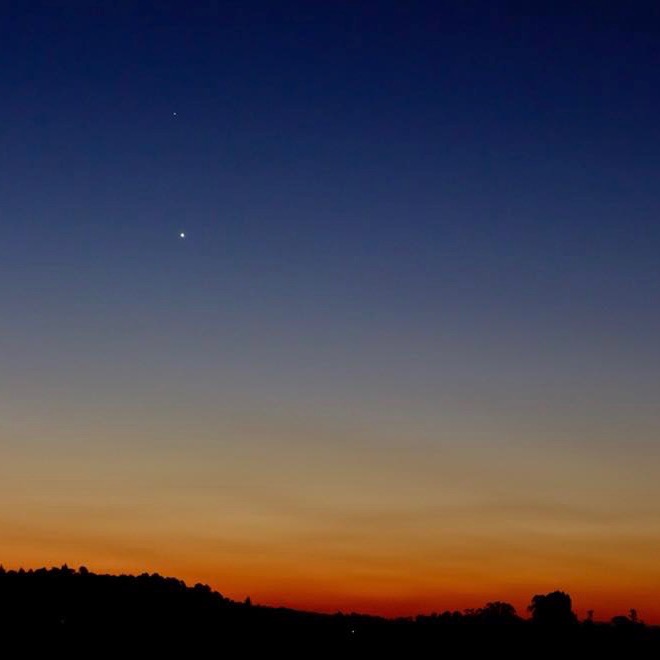 Photo at top: Venus in the east before sunrise – November 8, 2018 – via Brett Joseph in San Anselmo, California

Have you seen Venus yet? It passed more or less between us and the sun on October 26, 2018, at that time transitioning out of the evening sky and into the morning sky. This dazzling world has now reclaimed its position as the morning “star” and is currently heading toward another time of greatest brilliancy in late November and early December.

Given an unobstructed horizon in the direction of sunrise, you’ll easily see Venus blazing away in the east an hour before sunrise. And you can keep watching it, even as dawn’s light begins to wash the sky. It’s times like these – when Venus is near its brightest – that people report seeing it in the daytime (tips on how to see it here).

After all, Venus is bright! It’s the third-brightest celestial body to light up our sky, after the sun and moon.

There are a couple of bright stars near Venus now, which you can see if you get up early enough. Bright orange Arcturus is to the north (left) of Venus. Spica, the constellation Virgo’s brightest star, has been paired up with Venus on the sky’s dome for some days and will remain near Venus through the end of this month.

Spica is what’s called a 1st-magnitude star, or one of the brightest stars in our sky. Venus shines some 30 times more brilliantly than Spica.

Do you have a telescope? If so, this upcoming month presents a fine time for watching Venus’ waxing crescent phase through the telescope. On November 14, 2018, Venus’ disk will be about 10 percent illuminated by sunshine. Day by day, as Venus travels farther away from Earth, Venus is nonetheless brightening in the morning sky. That’s because Venus’ phase is actually waxing (widening), and by the month’s end, Venus’ disk will be 25 percent illuminated in sunshine.

Want to know Venus’ present phase? Click here and choose Venus as the object of interest.

Venus shines at its brightest as the morning “star” whenever its disk is about 25 percent illuminated by sunshine. This always happens some 36 days after Venus reaches new phase at inferior conjunction. Therefore, Venus will reach its greatest illuminated extent in early December 2018, or 36 days after Venus reached inferior conjunction on October 26, 2018. At greatest illuminated extent, the illuminated portion of Venus covers the most square area of sky, and it’s at and around this time that Venus shines most brightly in the morning sky.

After reaching greatest illuminated extent on December 2, 2018, Venus’ phase will widen but its disk size will shrink, so Venus’ overall brightness will slowly but surely decline. Even so, Venus will remain the second-brightest celestial object to grace the morning sky (after the moon) until Venus transitions out of the morning sky into the evening sky at full phase (or superior conjunction) on August 14, 2019.

Bottom line: We’ve received many photos of Venus in the morning sky, near the sunrise point. You can see it, too! Just look east before dawn brightens the sky.

Thank you! Your submission has been received!
Oops! Something went wrong while submitting the form.
END_OF_DOCUMENT_TOKEN_TO_BE_REPLACED