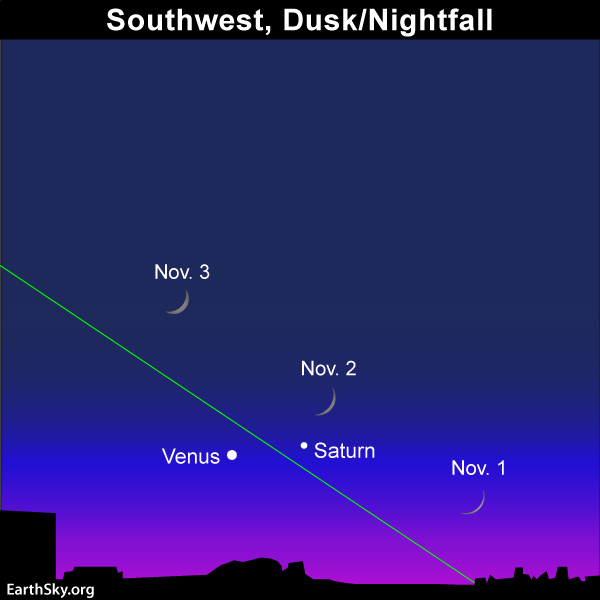 Today – November 2, 2016 – brings the earliest noontime of the year. Plus, this evening, you’ll find the moon in the west after sunset with two planets. A third planet is also nearby. More about earliest noontime below.

The planets are very bright Venus and fainter Saturn, near the moon after sunset in early November. The third planet is Mars, located higher in the sky. On November 2, look for the moon near Venus and Saturn at nightfall, as soon as the sky begins to darken. They’ll soon follow the sun below the western horizon. On November 2, an imaginary line from the moon through Saturn points in the general direction of Mars. See the chart below.

In the coming evenings, the moon will be climbing toward the red planet Mars. Look for the moon to partner up with Mars on November 5 and 6. And, if you’re blessed with a dark sky, look for The Teapot star pattern – a well-known asterism in the constellation Sagittarius – in between Venus and Mars, as depicted on the sky chart below.

The Teapot marks the approximate direction to the center of our Milky Way galaxy. 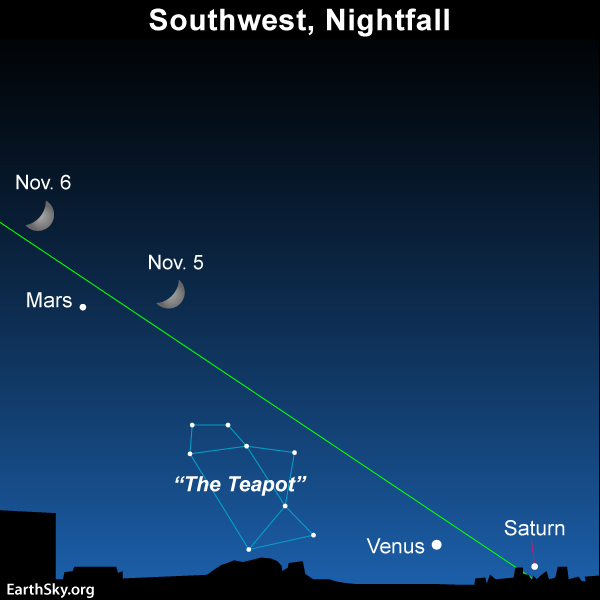 In a dark sky, you might even be able to catch The Teapot in between Venus and Mars. The moon will be near Mars on November 5 and 6.

Earliest noon recurs every year on or near this same date. What does it mean? Only that – all around the world – the sun reaches its midday noontime position earlier by the clock today than at any other time of the year.

After today, the day length as measured by successive solar noons lasts a bit longer than 24 hours by the clock. So the discrepancy between solar noon and clock noon will gradually lessen over the next 7 to 8 weeks, until local noon by the clock and sun agree on or near December 25. (See the equation of time graph below.) Every year, the year’s latest noon occurs on or near February 11.

The year’s latest noon in February comes about one-half hour later by the clock than the year’s earliest noon in early November. 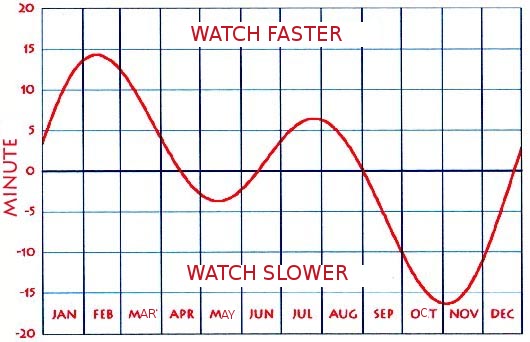 The equation of time graph via Wikipedia. The earliest noontime by the clock comes in early November and the latest noontime occurs around February 11.

For people living at the equator, the earliest sunrise and earliest sunset occur on the same day, on or near November 2. That’s because the daylight hours don’t appreciably change throughout the year.

Bottom line: Around the world on November 2, 2016, the earliest noontime of the year occurs. Also on this date, the moon joins with the planets Venus and Saturn in the west after sunset.