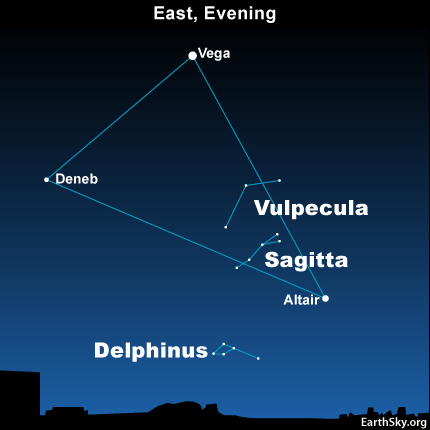 The Summer Triangle is not a constellation but a large asterism consisting of three bright stars in three separate constellations. These stars are Vega, Deneb and Altair. If you can find the Summer Triangle, you can use it to locate three of the sky’s smallest constellations: Vulpecula the Fox, Delphinus the Dolphin and Sagitta the Arrow. All three would be impossible to see from the city, but they’re lots of fun to see in a dark sky.

How can you find them? Look at the detailed chart below, and try picking out Vega, Deneb and Altair. Notice the large triangle they make if you draw lines between them. This triangle pattern – which is easily found in the sky on Northern Hemisphere summer evenings – is the Summer Triangle.

Now – still using the chart at the bottom of this post – or maybe after purchasing this awesome constellation chart from the store at Skyandtelescope.org – look within and around the Summer Triangle for Delphinus, Sagitta and Vulpecula.

Delphinus is a truly delightful little constellation that really resembles a dolphin leaping among the waves. Delphinus is one of the earliest constellations, first cataloged by the Greek astronomer Ptolemy in the second century. Sometimes, Delphinus is said to be the Dolphin that carried a Greek poet – Arion – safely away from his enemies. Other times, this sky Dolphin is said to represent the dolphin sent by the sea god Poseidon to find Amphitrite, the Nereid he wanted to marry.

Sagitta – the third smallest constellation in our sky – is near Vulpecula on the sky’s dome. Its name means “the arrow” in Latin. If you look for Sagitta, you’ll see why. This little star pattern does have a shape reminiscent of an arrow. Sagitta is also one of the earliest constellations, named by Ptolemy in the second century. Sagitta is sometimes said to be an arrow shot from the bow of Hercules, a mythological hero and god.

Vulpecula means “the little fox” in Latin, and it’s the hardest to find of these three small constellations because it lacks a distinctive shape. Vulpecula is a relatively new constellation, introduced by the Polish astronomer Johannes Hevelius in the late 17th century. If you’re up for a binocular challenge, also try finding the Coathanger asterism in Vulpecula. 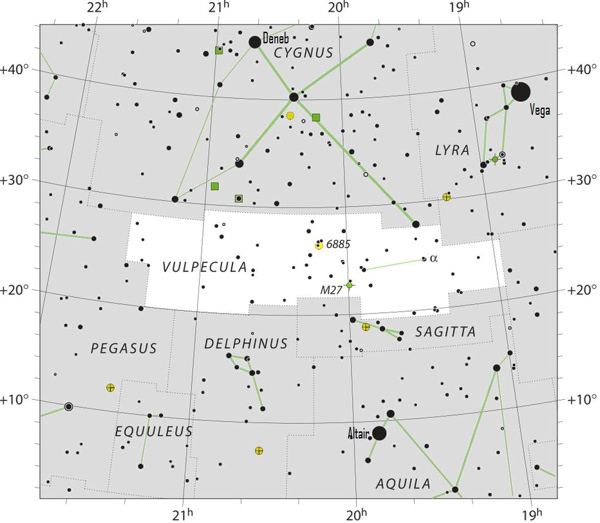 View larger. | Once you’re familiar with the Summer Triangle, star-hop from there to the nearby small constellations. Chart via IAU and Sky & Telescope (Roger Sinnott & Rick Fienberg)/ Wikimedia Commons.

Want more about the Summer Triangle? Check out these articles.

Bottom line: You need a dark country sky to see these 3 small constellations: Vulpecula the Fox, Delphinus the Dolphin and Sagitta the Arrow.