See the Winter Circle before dawn 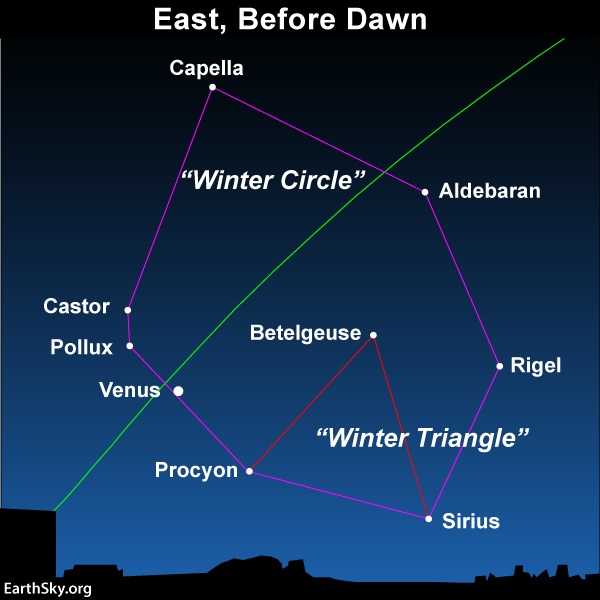 Although it’s summer in the Northern Hemisphere, a major sign of winter now looms large in the predawn/dawn sky. The dazzling planet Venus beams in front of the great big lasso of stars known as the Winter Circle. For the next several days, Venus shines at the eastern border of the Winter Circle, midway between the Procyon, the Little Dog Star, and the Gemini stars, Castor and Pollux.

The Winter Circle (sometimes called the Winter Hexagon) is an asterism – a star pattern that is not a recognized constellation. This humongous star formation consists of six 1st-magnitude stars in six different constellations.

The star Castor in the constellation Gemini, although not a 1st-magnitude star, counts as the sky’s brightest 2nd-magnitude star.

By the way, are you familiar with the constellation Orion the Hunter? The Winter Circle even dwarfs the Mighty Hunter, which only makes up the southwest (lower right) portion of the Winter Circle. If you’ve never seen the Winter Circle, but are acquainted with Orion, this constellation presents a great jumping off place for circumnavigating this brilliant circle of stars. Best of all, these stars are so bright that the’re even visible in the morning twilight. 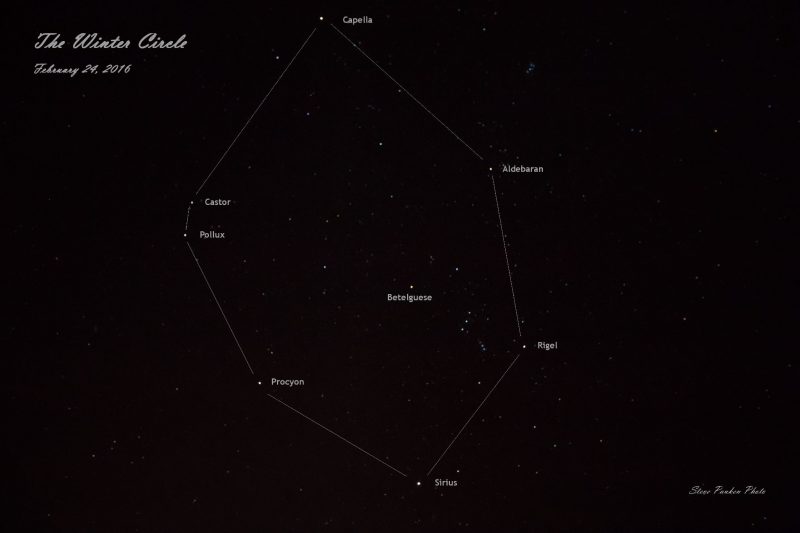 Steve Pauken captured the Winter Circle on February 24, 2016, and wrote: “After seeing an illustration in EarthSky, I went out the back door to look for it. It was directly overhead, so I put my camera on the tripod, aimed straight up, and captured the image after a few tweaks for focus.”

The green line on the feature sky chart at top depicts the ecliptic, the Earth’s orbital plane projected onto the sky. The ecliptic can also be regarded as the sun’s apparent yearly pathway in front of the constellations of the zodiac. If you could see the stars in the daytime, you’d see the sun directly north of the star Aldebaran around June 1. Thereafter, the sun stays in front of the Winter Circle for about 1 1/2 months. Then the sun passes to the south (below) the Gemini stars, Castor and Pollux, in mid-July (about where you see Venus in late August/early September 2020).

Bottom line: These next few days, before daybreak, let Venus, the third-brightest celestial body, after the sun and moon, respectively, serve as your guide to the majestic Winter Circle.