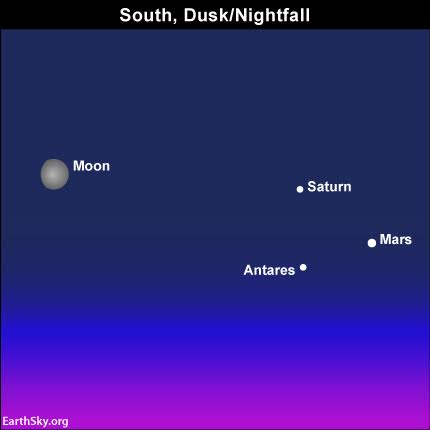 On August 13, 2016, astronomical almanacs list the planet Saturn as stationary at 18 hours Universal Time. That is 1 p.m. for us in central North America. Convert to your time zone.

What does it mean? It doesn’t mean that Saturn – like Polaris, the North Star – will remain in the same place in the sky all through the night tonight. For most skywatchers, most everywhere on Earth, Saturn will appear at its highest in the sky around sunset. It’ll descend westward, to set in the west around midnight (1 a.m. local daylight-saving time) at mid-northern latitudes, and after midnight at more southerly latitudes. This movement of Saturn across the sky throughout the night is due to Earth’s spin on its rotational axis.

And it doesn’t mean, of course, that Saturn stops moving in space. In space, nothing ever stops moving.

Instead, the “stationary point” is an Earth-centered illusion.

Diagram via Wikipedia. The planets move in a counterclockwise direction as viewed from the north side of the solar system. Relative to the backdrop stars, the faster-moving inner planet sees the slower-moving outer planet moving in retrograde from A2 to A4..

This apparent movement of Saturn, first to the west and then to the east, is actually due to Earth’s motion in orbit around the sun. We move faster than Saturn – on an inner track around the sun – and that’s why Saturn appears to hang motionless at times, prior to changing its apparent direction of motion on our sky’s dome. It’s as if we are in a fast car, moving along a highway. From our perspective, slower cars can, for a time, appear to move backwards in contrast to the distant landscape.

Saturn is the most distant world you can easily see with the unaided eye. As a result, it moves rather slowly through the constellations of the zodiac. Yet Saturn, the sixth planet outward from the sun, will finally leave Ophiuchus to move into the constellation Sagittarius in late February 2017.

Keep an eye on Saturn and the Scorpion’s bright star Antares. How long will it take for you to discern Saturn’s change of position relative to Antares, a key star of the zodiac?

As always, the planet Saturn is found upon the zodiac – the great belt of stars that follows the ecliptic, or the sun’s annual path, across the sky. The planets are always found on or near the ecliptic – Earth’s orbital plane projected onto the constellations of the zodiac.