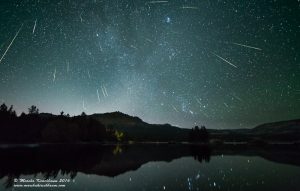 This composite covers a 2 and a half hour time span from 2:24 a.m. until 4:53 a.m. Each image with a meteor (27 of them) was rotated to place the meteor in time and radiant point the best I could using a marker off to the left and off image to where Polaris would be to rotate from. This way I could also eliminate the sporadic meteors and be pretty sure that everything here is a Perseid. Processed in Photoshop CC 2015.5 and Lightroom

I had been planning this shoot every since last year’s meteor shower. The Perseid shower is amazing and this one did not disappoint! Thunder Mountain in the Kirkwood Ski Resort, California is in the background and I felt it would be a nice place to watch the meteors fly and Wow, did they! Totally magical night. I chose to stack this set to try and give the viewer a sense of being there and the magic of watching those bits of cosmic dust fly across the sky. It takes a while to do this and this is the 3rd and last in my series that I call Silent Light, Perseid Symphony #1, 2, and 3, which can be seen on my Flickr site.

Thank you! Your submission has been received!
Oops! Something went wrong while submitting the form.
END_OF_DOCUMENT_TOKEN_TO_BE_REPLACED