Use Orion’s Belt to find Mercury

Mercury’s greatest eastern elongation – its greatest distance from the sunset – is today. But how can you tell which object you’re seeing is Mercury? 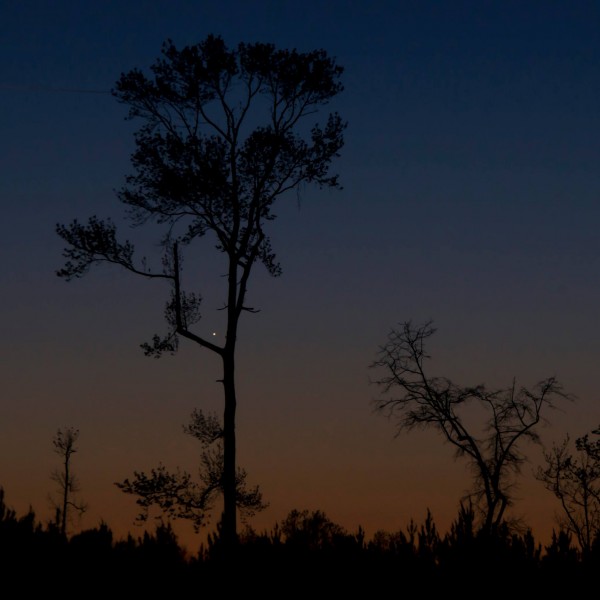 Ken Christison posted this lovely photo to EarthSky Facebook on April 6, 2016. He wrote: “Mercury was easy to catch this evening right after Sunset here in northeastern North Carolina.” Thank you, Ken! 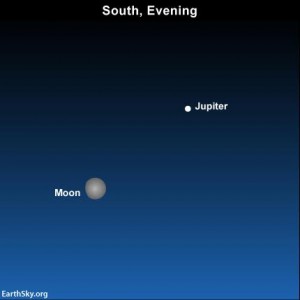 On April 18, look for Mercury after sunset. Or watch for brilliant planet Jupiter near the moon! It’ll be easier to catch Jupiter than Mercury near the horizon.

Tonight – April 18, 2016 – use Orion’s Belt to find Mercury, which is one of the five bright planets, but the most elusive among them, always near the sunset or sunrise. Mercury is in the sunset sky now, at greatest elongation (farthest from the sunset) on this date. The photo at the top of this post shows Mercury caught in the treetops during this evening apparition. It’s by an EarthSky friend on Facebook, Ken Christison. Thanks, Ken!

So Mercury stays low in the sky, typically, and – at this time of year – so does Orion. Look in early evening for the famous constellation Orion the Hunter, now about to disappear for another season.

Here’s how to use Orion to find Mercury. As Orion pops out after sunset, you might notice its three prominent Belt stars – a short, straight line of three medium-bright stars. Orion’s Belt always points to Sirius, nighttime’s brightest star – and you can see that for yourself tonight. But also, in the opposite direction, Orion’s Belt will be pointing – more or less – to Mercury, our solar system’s innermost planet. There’s a bright star in that part of the sky, too, Aldebaran in the constellation Taurus the Bull. Use the chart below to distinguish Aldebaran from Mercury.

From the Southern Hemisphere … assuming you’re at at temperate latitude, you’ll have a much harder time than those at northerly latitudes catching Mercury right now. From the Southern Hemisphere, the planet is much lower in the western sky as the sun goes down. Southern hemisphere dwellers will have an awesome opportunity to see Mercury in the morning sky in late May and June, 2016. 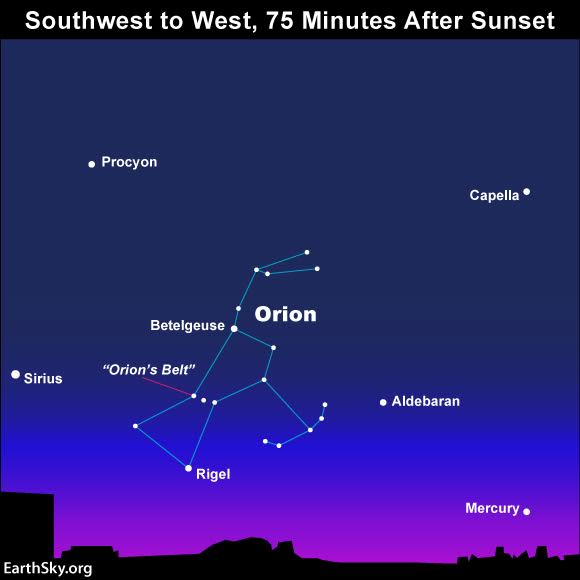 As dusk gives way to darkness, use Orion’s Belt to locate Sirius, the brightest star in the nighttime sky, plus the star Aldebaran and the planet Mercury.

It’s difficult to catch Mercury after sunset now from the Southern Hemisphere, but not impossible. Hello C. Vital caught the planet on April 17, 2016 from Rio de Janeiro, Brazil. He wrote: “When the Sun sets, the elusive little planet will be only 11.1° above Rio`s north-northeastern horizon in spite of its considerable 19.9° elongation. However, the use of a high zoom camera can help in the case. See the animation I made this evening some 38 minutes after sundown. It shows Mercury setting and it includes a total of 24 photos.” Thanks, Helio!

From northerly latitudes, Mercury is fairly easy to catch as dusk gives way to darkness. But if you’re not sure which object is Mercury, let Orion point the way.

Notice the star Aldebaran on the chart above. Practiced stargazers use Orion’s Belt to locate this star, too, which is the brightest star in the constellation Taurus the Bull. It’s hard to say whether the star Aldebaran or planet Mercury will be the first to come out after sundown. Mercury is brighter than Aldebaran, but Mercury hovers closer to the horizon.

At mid-northern latitudes, Mercury sets a whopping 100 minutes after sunset – given an unobstructed western horizon.

From northerly latitudes, Mercury will set an hour or more after sunset for the rest of the month. 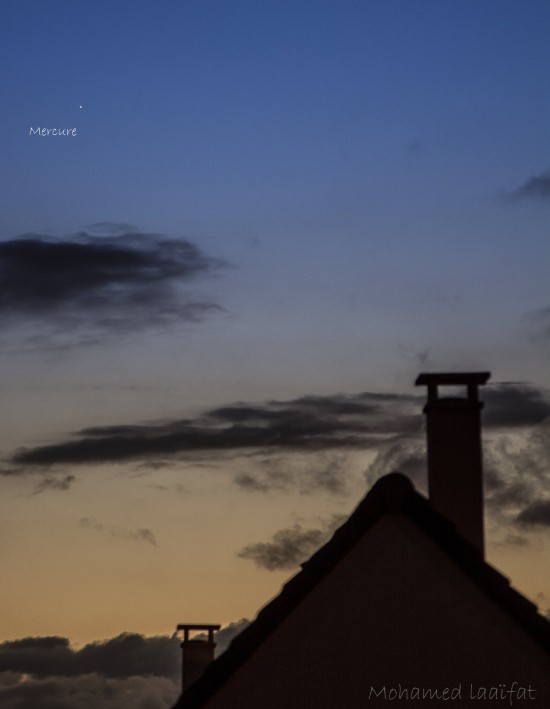 Can’t find Orion? It’s possible, especially at northerly latitudes, where this constellation is beginning to fade into the twilight glare.

If you have trouble finding Orion, try using some key stars. Although Mercury easily shines on par with the evening’s brightest stars, Mercury sits lower in the sky and closer to the sun’s glare. So several evening stars will probably spring out into the deepening dusk before Mercury does. You’ll probably see Sirius come out first, followed by Capella, Procyon, Betelgeuse and Rigel. Look for these stars on the chart below … and in the sky.

Depending on which stars are at your disposal, try star-hopping to Mercury. At mid-northern latitudes, seek for Mercury almost straight down from the bright star Capella. Or, from any latitude, draw an imaginary line from the star Procyon through the star Aldebaran to locate Mercury near the horizon.

If you can spot Mercury as dusk gives way to darkness, you might also be able to view the Winter Circle at nightfall. At northerly latitudes, the Winter Circle star Rigel could be difficult to see because it’s quite close to the horizon as the stars come out.

Like Orion and Mercury, the Winter Circle will soon be fading into the sunset glare. 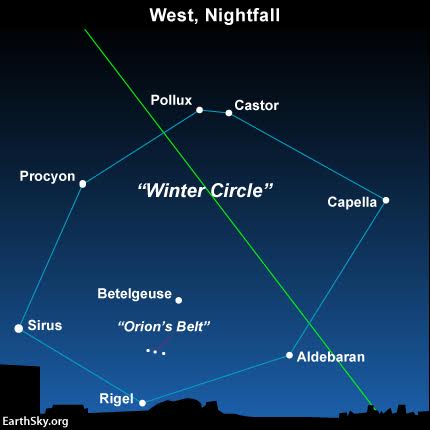 Bottom line: In April, 2016, look in early evening for the famous constellation Orion the Hunter, now about to disappear for another season. It can help you find the planet Mercury, which is one of the five bright planets, but an elusive planet because it always stays near the sunset or sunrise in our sky.