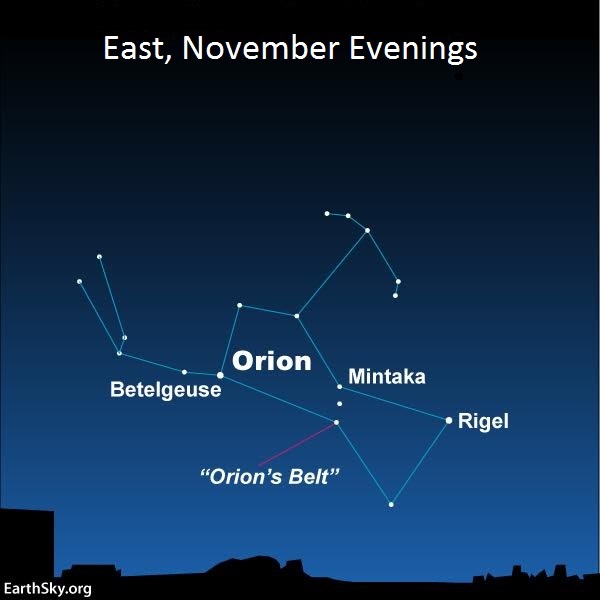 See the three stars at the mid-section of the constellation Orion the Hunter? These stars are very noticeable and famous in many cultures as Orion’s Belt. But – to the Aymara people of Bolivia, Peru and Chile – they represent a Celestial Bridge. And there’s good reason for that. Orion’s Belt – the Celestial Bridge – links the northern and southern hemispheres of the sky.

Consider the westernmost star of Orion’s Belt, called Mintaka. This star sits almost directly astride the celestial equator: the projection of Earth’s equator onto the stellar sphere.

Where can you find Mintaka and the constellation Orion? In late November, from around the world, Orion rises into your eastern sky around 9 p.m. and climbs highest up for the night around 1 to 2 a.m. local time (the time on your clock no matter where you are on the globe).

When dawn is breaking, or about to break, say around 5 to 6 a.m., the Hunter sits low in your western sky. 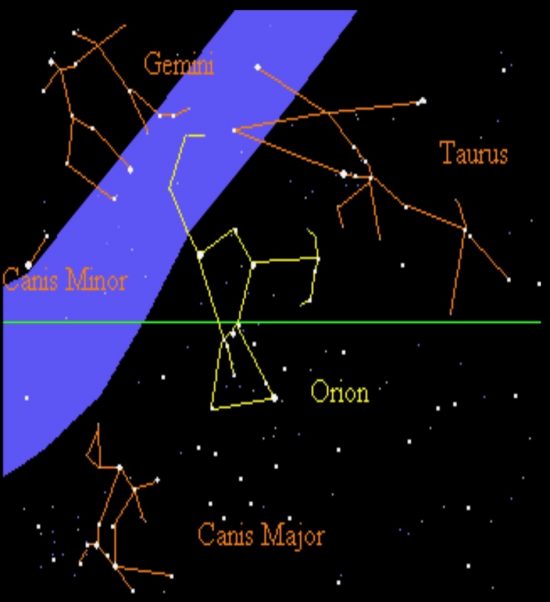 The constellation Orion straddles the celestial equator, which is indicated by a green line on this chart. Since the celestial equator intersects horizons all over the world at points due east and due west (as shown on the chart above this one), the star Mintaka – the one directly on the green line – can be used to find those cardinal directions in your sky. Image via Aloha.net.

Its location on the celestial equator makes Mintaka a good guidepost for finding directions here on Earth. That is, Mintaka and the other stars of the Celestial Bridge are visible worldwide. From all over the world, Mintaka rises due east and sets due west, and remains in the sky for 12 hours. Mintaka climbs to its highest point in the sky midway between rising and setting.

If, when it’s highest in the sky, this star shines at your zenith (your straight-overhead point), then you must be at the equator.

If this star shines in the southern half of your sky, then you must be north of the equator.

The story of the Celestial Bridge is one of many about the constellation Orion. That’s because it’s so noticeable on our sky’s dome. If you’re outside at night one evening soon, watch for it!

The celestial equator is an imaginary great circle on the dome of Earth’s sky, drawn directly above the equator of the Earth. Image via Physics.csbsju.edu.

Bottom line: To the Aymara – indigenous people in the Andes and Altiplano regions of South America – the famous sky feature we know as Orion’s Belt is seen as a Celestial Bridge between the sky’s northern and southern hemispheres. The westernmost star in the Belt, or Celestial Bridge – a star called Mintaka – lies directly on the celestial equator.