Orion and Sirius the Dog Star 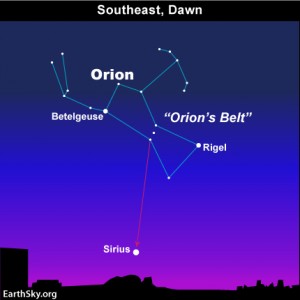 In late August and early September, look for a hint of the changing season in the predawn sky: Orion the Hunter and Sirius the Dog Star. The very noticeable constellation Orion the Hunter rises before dawn at this time of year, recognizable for the short straight line of three stars that make up Orion’s Belt. And the sky’s brightest star Sirius – sometimes called the Dog Star because it’s part of the constellation Canis Major the Greater Dog – follows Orion into the sky as the predawn darkness gives way to dawn. 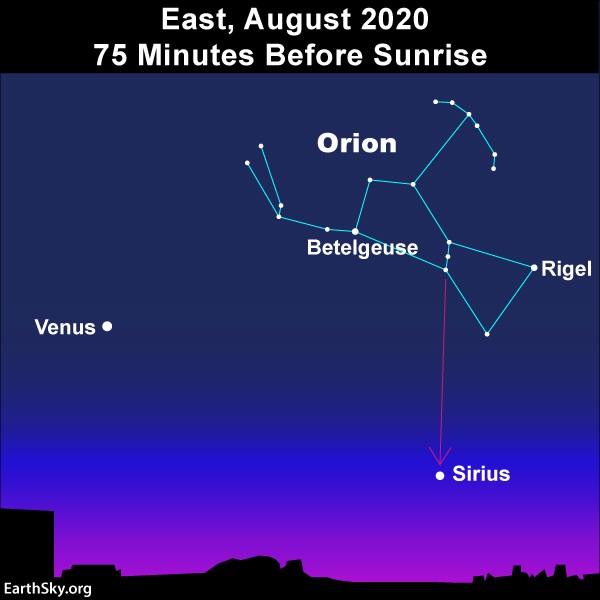 This year, in 2020, let the dazzling planet Venus help guide your eye to Orion and Sirius.

Have you noticed a very bright, madly twinkling star in early morning sky? Many do – around the world – at this time of year. That star is Sirius. It’s so bright that, when it’s low in the sky, it shines with glints of red and flashes of blue – very noticeable!

Orion and the nearby star Sirius will become visible in the evening by northern winter (or southern summer). But presently the Hunter and the Dog Star lord over the sky at dawn’s first light. 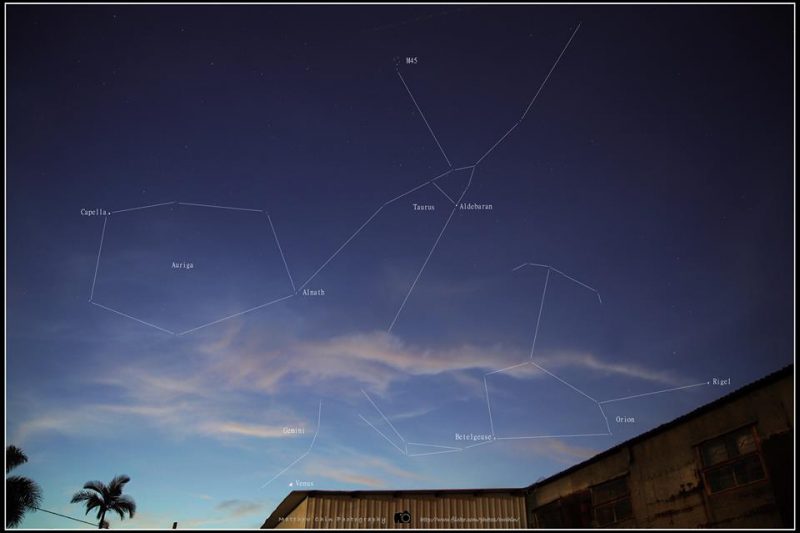 Matthew Chin in Hong Kong caught this photo in late July 2014, showing the stars and constellations that we in the Northern Hemisphere associate with winter. In late August – a full month later – all of these stars will have shifted higher in the east before sunrise. By December, they’ll be ascending in the east in the evening!

Orion was low in the west after sunset around March and April. By June of each year, this constellation lies behind the sun as seen from Earth. Orion only returned to visibility in Earth’s sky about a month ago (see image above). When a constellation becomes visible again, after being behind the sun, it always appears in the east before sunrise.

Because – as Earth orbits the sun – all the stars rise two hours earlier with each passing month, Orion is now higher at dawn than a month ago.

As seen from the Northern Hemisphere, Orion precedes Sirius the Dog Star into the sky. After Orion first appears at morning dawn, you can count on Sirius to appear in the morning sky a few weeks later. You should be able to see Sirius at or before dawn right now – unless you live at far northern latitudes.

But, even from Earth’s far north, you won’t have to wait much longer to see Sirius! 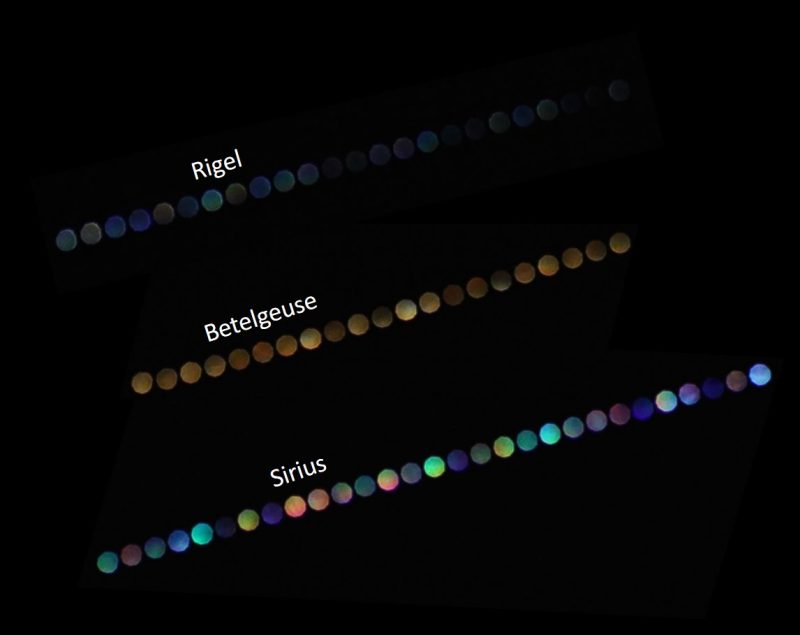 Be sure to notice the colors of Rigel and Betelgeuse in Orion, and of Sirius itself. When seen low in the sky on a summer morning, you might notice bright Sirius flashing in many colors! In fact – although Rigel and Betelgeuse are intrinsically colorful, due to the types of stars they are – Sirius shines mostly white. The colors we see in Sirius when it’s low in the sky are the result of looking at this very bright star through a greater-than-usual thickness of Earth’s atmosphere in the direction of the horizon. Image via Amanda Cross. Read more about this image.

Bottom line: A sign of the changing season, Sirius – the sky’s brightest star – is visible before sunup. You’ll know it’s Sirius if the very noticeable three stars in Orion’s Belt point to it.