An ocean in the sky

The star Fomalhaut shines in lonely splendor on these November evenings. Look south from the Northern Hemisphere – more overhead from the Southern Hemisphere. The region of the sky around Fomalhaut is known as a celestial ocean. 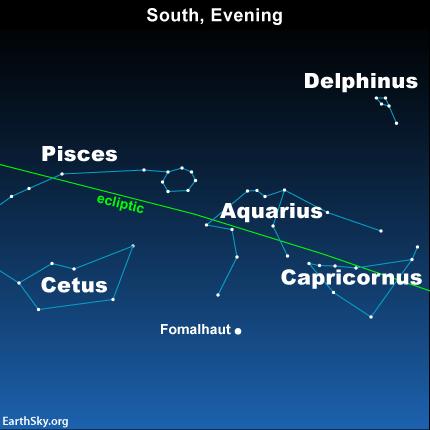 The constellations visible in the south in autumn constitute a celestial sea.

Note for Southern Hemisphere stargazers: You can see this bright star – and this region of the sky – easily in November, too. In fact, you can see them better than we can in the north. For you, these stars are more overhead.

No matter where you are on Earth, you need a very dark sky, a couple of hours after sunset, to see the faint stars all around Fomalhaut. This part of the sky – and these faint stars in Fomalhaut’s vicinity – are what the early stargazers regarded as a celestial ocean. Many of the constellations in this part of the sky are connected with water – perhaps because the sun was moving in front of these stars on the great pathway of the ecliptic during a rainy season long ago.

In a dark sky, you can see Cetus the Whale, Pisces the Fish, Aquarius the Water Carrier, Capricornus the Sea Goat and Delphinus the Dolphin – all in Fomalhaut’s vicinity. Fomalhaut itself is located in the constellation Piscis Austrinus, the Southern Fish – another swimmer in the celestial ocean.

Fomalhaut is sometimes called The Lonely One or The Solitary One. It’s said to be lonely because it’s noticeable as the only bright object in an otherwise empty region of the sky. This is a blue-white star, located only a couple of dozen light-years away. It’s one of the easiest stars to find any northern autumn, because it’s so bright and so solitary. 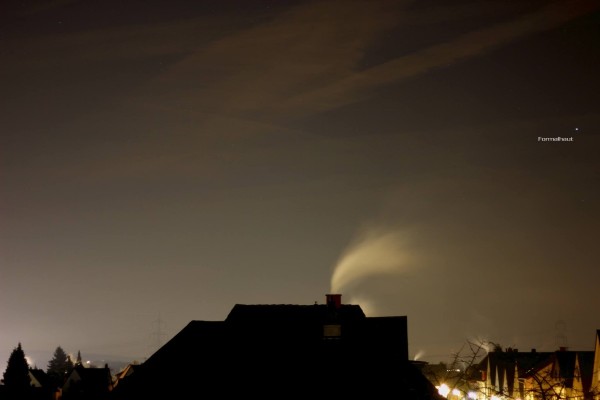 Fomalhaut is sometimes called the Loneliest Star because no other bright stars shine near it in the sky. Photo by EarthSky Facebook friend Tony Gieracki. Thank you, Tony!

Bottom line: The star Fomalhaut shines in lonely splendor on these November evenings. Look south from the Northern Hemisphere – more overhead from the Southern Hemisphere. The region of the sky around Fomalhaut is known as a celestial ocean.

EarthSky’s guide to the bright planets