Try for moon and Saturn after sunset 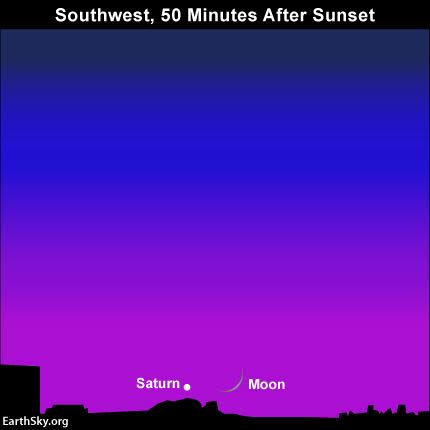 Tonight – November 12, 2015 – you have a last chance to catch Saturn near the waxing crescent moon, before the golden planet disappears into the sunset glare.

In fact, for these next several evenings, you might be able to view Saturn in the evening sky. By the end of this month – on November 30, 2015 – Saturn will officially pass out of the evening sky and into the morning sky. November 30 is the day of Saturn’s superior conjunction – when it swings behind the sun as seen from our earthly vantage point. Luckily for Saturn lovers, Earth moves a lot faster than Saturn does in the race of the planets around the sun. We move at 18 miles (30 km) per second, in contrast to about 6 miles (10 km) per second for Saturn. Thus – if you’re diligent and have a clear eastern horizon – you’ll be able to see Saturn in the morning sky by the latter part of December 2015.

The featured chart at the top of this post shows the sky scene at North American mid-northern latitudes for November 12.

At mid-northern latitudes in Europe and Asia, on this same date, a younger and thinner waxing crescent moon lurks closer to the horizon and sets sooner after sunset. Most likely, you won’t first see the moon after sunset from Europe or Asia until Friday, November 13.

In the Southern Hemisphere, something similar holds true. Those west of the Greenwich meridian – say, in South America – see the moon closer to Saturn and higher up in the sky than do the sky watchers in Africa, Indonesia, Australia and New Zealand.

For everyone around the globe … if you don’t see the young moon after sunset on November 12, look for a larger lunar crescent higher in the sky on November 13 and 14.

No matter where you live worldwide, it’ll be to your advantage to find an unobstructed horizon in the direction of sunset. Also, remember that the illuminated portion of the lunar crescent will be pointing toward Saturn as dusk falls on November 13 and 14. Even so, you may need binoculars to spot Saturn near the horizon and in the glare of evening twilight.

Good luck with your search! 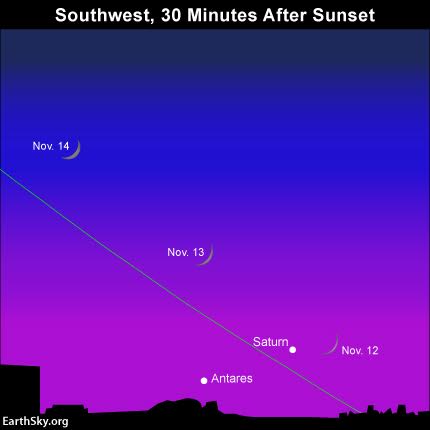 Although we show the star Antares on the sky chart, you are not likely to spot this star after sunset – especially at more northerly latitudes. Saturn will pose enough of a challenge. Good luck!

Bottom line: You might see the moon and Saturn close on November 12, 2015. Or you might catch Saturn below the moon on November 13 or 14. These evenings may be your last chance to view Saturn in the evening sky this year (without optical aid). By the end of this month – on November 30, 2015 – Saturn will pass out of the evening sky and into the morning sky.