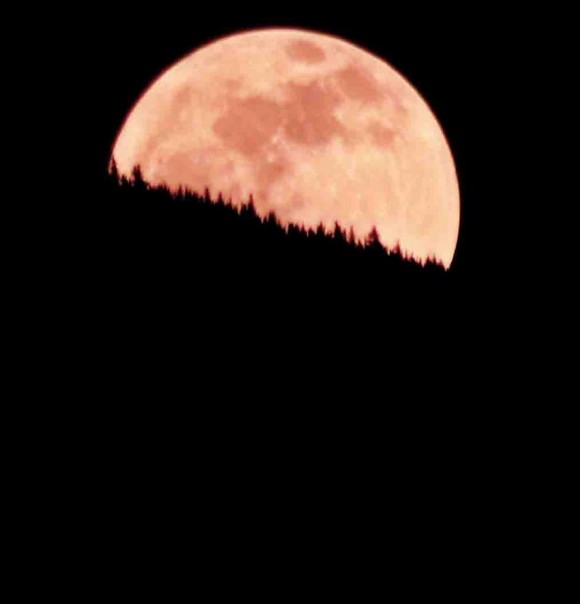 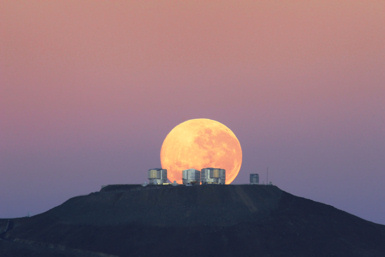 Full moon about to set in the west as sun rises in the east, via G. Gillet/ESO

Tonight – November 25, 2015 – the full moon will stay up all night and sleep in all day tomorrow (maybe like your college student, home for the holiday). Watch the moon rise in the east as darkness falls on November 25 and set in the west around sunrise the following morning. At midnight, when the sun lurks beneath our feet, the moon will assume the position of the May noonday sun.

We in the North America, often call this full moon the Beaver Moon or Frosty Moon. In the Southern Hemisphere, where it’s now spring, the November full moon could be called the Flower Moon. Click here to learn more about full moon names. 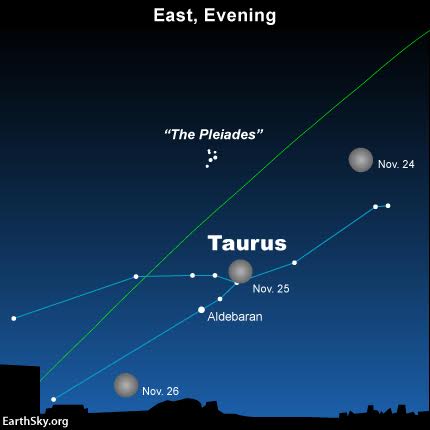 The full moon shines in front of the constellation Taurus the Bull. Six months from now – in late May – the sun will be in front of Taurus, and in the vicinity of Aldebaran and the Pleiades star cluster. The green line depicts the ecliptic – Earth’s orbital plane projected onto the dome of sky. Northern US and Canada can watch the moon occult Aldebaran late tonight. Click here for details.

All full moons rise around sunset and set around sunrise. Tonight’s November full moon – like the full moon at any season – shines from dusk until dawn, and climbs to its highest point in the sky around midnight. 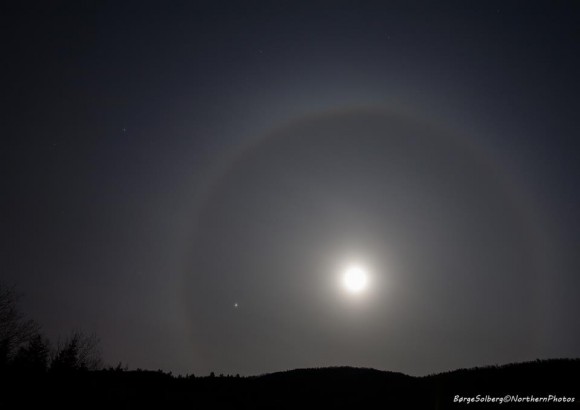 This awesome image is from November, 2012. It came from our friend Sorge Solverg in northern Norway and shows Jupiter left of the moon, with both surrounded by a lunar halo. Read more about lunar halos here.

Because the full moon occurs when the moon is most directly opposite the sun for the month, the full moon follows nearly the same arc across the sky that the sun follows six months henceforth. In both the Northern and Southern Hemispheres, the November full moon will rise in the east-northeast and set in the west-northwest – just as the sun does in May. In the Northern Hemisphere, tonight’s full moon will soar up high – like the springtime sun. But south of the equator, the moon will follow the low trajectory of the autumn sun.

So on this November 25, 2015 night, the full moon shines from dusk until dawn … unless you live so far north of the Arctic Circle that the moon simulates the midnight sun, staying out for 24 hours around the clock.

Bottom line: Full moon is November 25, 2015. Although moon can be seen from anywhere worldwide on this night – except southern Antarctica – its path in the sky varies, depending on where you live. Enjoy the all-night appearance of the full moon tonight, as it mimics the path of the May sun across your sky!