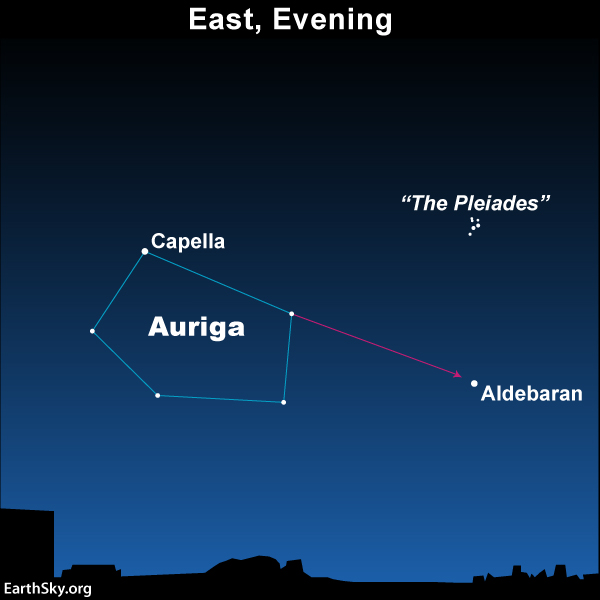 Tonight – November 9, 2016 – the bright waxing gibbous moon is sure to erase many stars from the blackboard of night. But, at northerly latitudes in the Northern Hemisphere, we expect the bright northerly stars Capella and Aldebaran to be visible this evening, despite tonight’s moonlit glare.

There are four bright stars that shine close enough to the ecliptic to be occulted by the moon: Regulus, Spica, Antares and Aldebaran. Aldebaran is the northernmost and brightest of these four zodiacal stars.

For the Northern Hemisphere, the presence of Capella and Aldebaran in the eastern evening sky signals that autumn is here and waning toward the winter season. If you don’t see these sparkling gems – yellowish Capella and ruddy Aldebaran – at nightfall or early evening, just wait a while. They’ll climb upward throughout the evening hours, to reach their high point for the night an hour or two past the midnight hour. Look for them before going to bed.

After the moon has dropped out of the evening sky in the second half of November 2016, you can star-hop to Aldebaran from the constellation Auriga, as shown on the featured sky chart above.

We often speak of the “fixed” stars because they’re much like dots in a connect-the-dots book. Although the stars go full circle through the sky each day in 23 hours and 56 minutes, the stars still stay fixed relative to each other. Although the sun’s position on the equinox shifts westward in front of the backdrop stars by about one degree over the course of a single human lifetime, the stars still appear fixed relative to each other.

However, over the long course of time, the stars will change position relative to one another. Take, for instance, Capella and Aldebaran. Some 500,000 years ago, these two stars were separated by only 2o when they lodged less than 3o from the north celestial pole, serving as a double pole star!