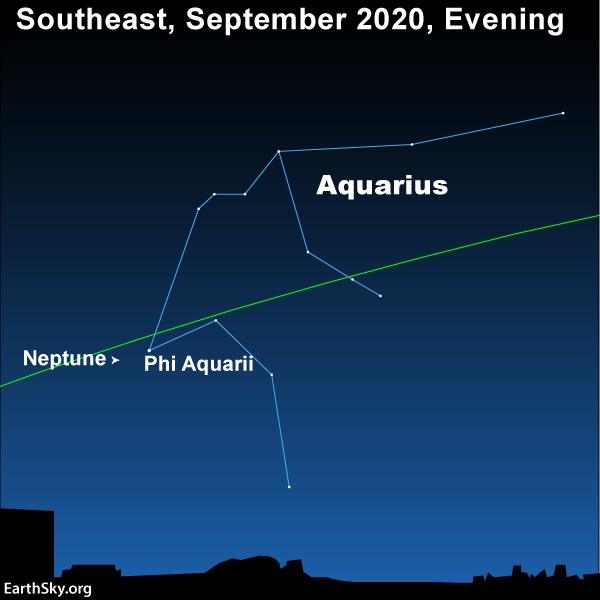 On September 11, 2020, Neptune reaches opposition, when it is 180 degrees from the sun in our sky. In other words, Earth passes more or less between Neptune and the sun, as we do every year in our yearly orbit. Also, on September 11, Earth and Neptune are closest together for the year.

By closest, we don’t mean close. Neptune, the eighth planet outward from the sun, lodges in the outskirts of our solar system. Its current distance is about approximately 2.7 billion miles (4.3 billion km).

For any superior planet – that is, for any solar system planet beyond Earth’s orbit – opposition is a special event. When any planet outside of Earth’s orbit is at or near opposition, Earth comes closest to that planet for the year, and that planet, in turn, shines most brightly in our sky. Even at opposition, however, Neptune, the eighth planet, is not bright. In fact, Neptune is the only major solar system planet that’s absolutely not visible to the unaided eye. This world is about five times fainter than the dimmest star that you can see on an inky black night. You’ll need binoculars (at least) and a detailed sky chart to see Neptune in front of the constellation Aquarius.

Because we’re more or less between Neptune and the sun around now, Neptune is rising in the east around the time of sunset, climbing highest up for the night around midnight and setting in the west around sunrise. As viewed from Earth now, this world is in front of the constellation Aquarius the Water Carrier, right next to the 4th-magnitude star Phi Aquarii.

Phi Aquarii, though faint, is easily visible to the eye alone on a dark night. Because the moon is now a waning crescent, the moon-free evening hours offer a dark sky for viewing Neptune.

Neptune and Phi Aquarii are so close together on the sky’s dome at present that the two readily fit within a single binocular field. In fact, you might see them together in a low-powered telescope, with blue-green Neptune offering a color contrast to the ruddy tint of Phi Aquarii. Neptune is nearly 30 times fainter than the star Phi Aquarii. You may well be able to view Neptune with this star tonight.

Even with an optical aid, Neptune may look like a faint star. You need to magnify Neptune by about 200 times and have a steady night of seeing to view this distant world as a small disk. 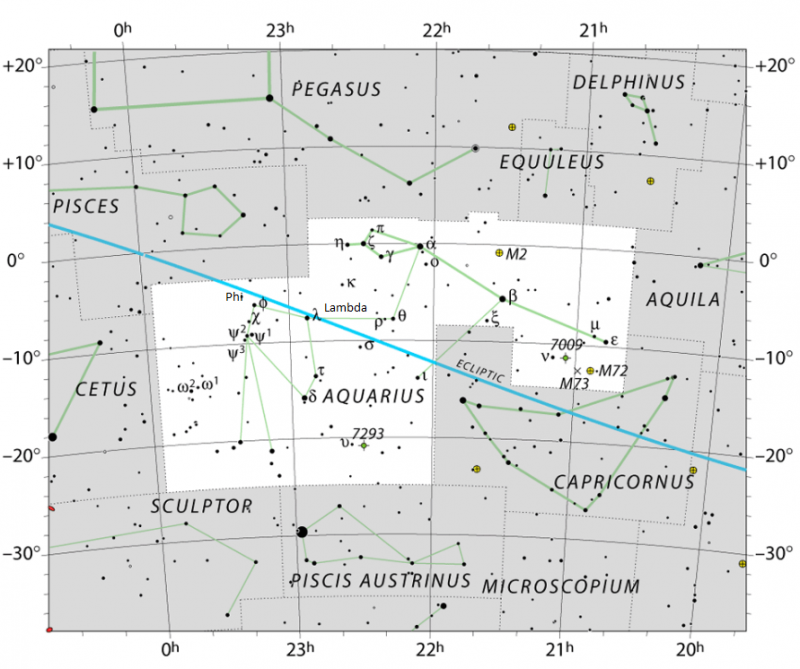 Sky chart of the constellation Aquarius via IAU. Seek for Neptune near the star Phi Aquarii.

We know it’s unlikely you’ll see Neptune unless you have optical aid and a detailed star chart via Sky & Telescope.

Bottom line: Neptune’s opposition – when it’s 180 degrees from the sun on the sky’s dome – comes on September 11, 2020. You need optical aid to spot it. Links to charts here.