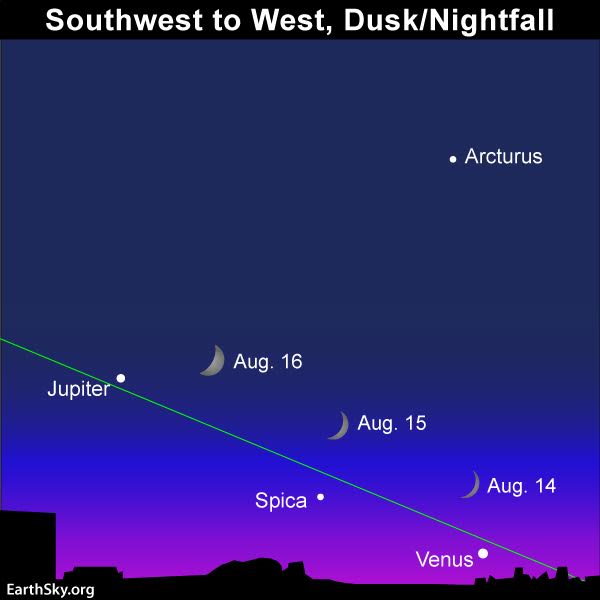 After sunset on August 14 to 16, 2018, look west to see three brilliant worlds – the moon, Venus and Jupiter – beautifying the evening twilight. Each successive evening, after sunset, watch for the waxing crescent moon to move away from Venus and closer to Jupiter. This daily eastward movement of the moon relative to the background stars and planets of the zodiac is due to the moon’s motion in orbit around Earth.

There are a total of four planets in the evening sky now, and the moon will pass each one in turn. Look back at this night sky post for charts and more information, if you want to mark your calendar!

Got that? Okay … now, on these August evenings or any evening you see a thin crescent moon, look for this:

That pale glow softly illuminating the moon’s nighttime side is called earthshine. See it on John Ashley’s photo, above? Yes, that is the night side of the moon, not Earth’s shadow on the moon. Earthshine is twice-reflected sunlight, which bounces off Earth to the moon, and then back. What causes it? Realize that, from the Earth-facing side of the moon now, an almost-full Earth beams in the lunar sky. You know how a full moon can light up an earthly landscape? Likewise, a full or nearly full Earth lights up lunar terrain.

In fact, a full or nearly full Earth lights up the moon’s surface even more effectively than moonlight does Earth. That’s because Earth has some 13 times the moon’s surface area. Plus, our world is three times more reflective of sunlight than the moon. Add those two facts together, and you can see why a full Earth in the moon’s sky is around 40 times brighter than a full moon in Earth’s sky.

Now let’s talk about Venus, the brightest planet on all three of these nights, and the planet closest to the moon on August 14. When we see a moon in the west after sunset, it’s always a crescent moon that’s waxing toward full. In contrast, whenever Venus first appears as an evening “star” in the west after sunset, this planet – through a telescope – always appears nearly full. It’s always a waning Venus, due to decrease in phase as the months pass. The difference is because the moon revolves around the Earth, while Venus revolves around the sun.

Have a telescope? These next few months present a great time to watch Venus through a telescope, as this world wanes from its half-lit waning quarter phase in mid-August to a thin waning crescent in September and October. We give you fair warning, though. Venus will be considerably easier to observe from the Southern Hemisphere where Venus is higher up in the sky at sunset. Remember, it is easier to view Venus’ phases in a twilight sky because the glare of Venus is so overwhelming after dark.

Bottom line: Watch the grand celestial spectacle – the moon, Venus and Jupiter – on August 14 to 16, 2018. You’ll find them all by looking west after sunset.

Thank you! Your submission has been received!
Oops! Something went wrong while submitting the form.
END_OF_DOCUMENT_TOKEN_TO_BE_REPLACED