Moon swings by Saturn and Jupiter 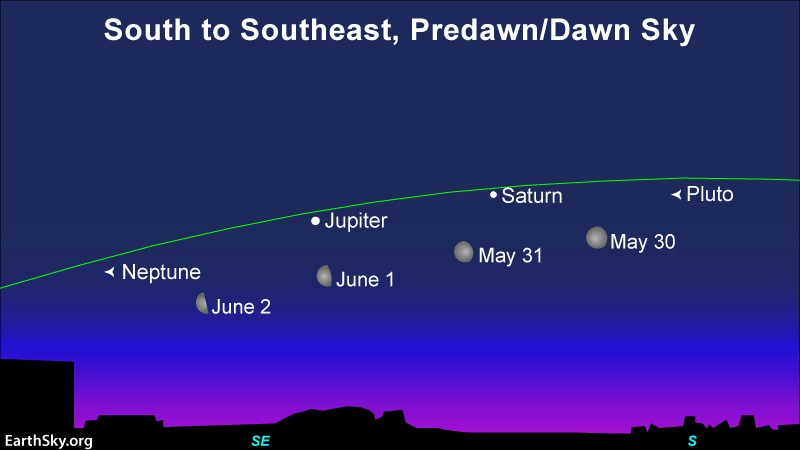 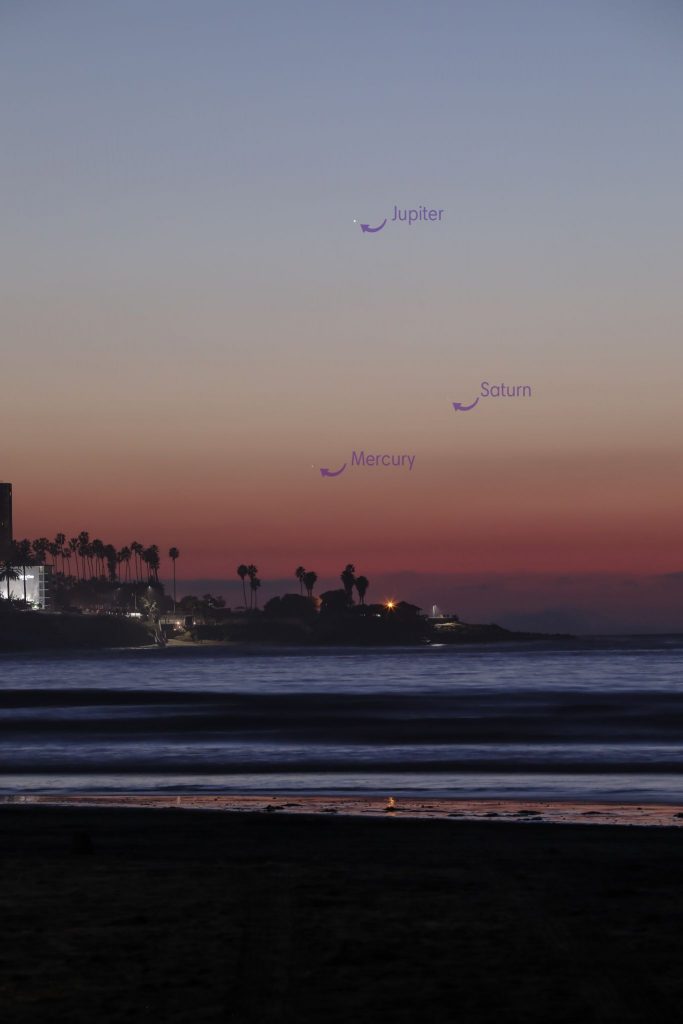 View larger at EarthSky Community Photos. Cattleya Flores-Viray in La Jolla, California took this photo at 5:45 pm on January 9, 2021. In early January 2021, Jupiter and Saturn were hard to see in the glow of evening twilight. Then in late January, February and March 2021, these worlds were difficult to view in the glow of morning dawn. Now’s the time to enjoy an eyeful of these morning planets, as they adorn the predawn sky throughout May and June 2021.

It is pretty easy to distinguish Jupiter from Saturn, because Jupiter is the much brighter of the two. Although Saturn shines as brilliantly as a 1st-magnitude star, Saturn pales next to king planet Jupiter, which outshines this golden-colored world by some 16 times. Jupiter ranks as the 4th-brightest celestial body to light up the heavens, after the sun, moon and the planet Venus, respectively. Fortunately, there’s no way to mistake Jupiter for Venus, or vice versa, because Venus only appears the evening sky.

Have a telescope? Saturn’s glorious rings and Jupiter’s four major moons – Io, Europa, Ganymede and Callisto – are easy to view through the telescope (even with a small, backyard variety). Saturn’s rings are inclined at 17 degrees toward Earth, making the rings readily observable through a telescope throughout 2021. Some people can even see Jupiter’s 4 major moons – sometimes called the Galilean moons – with binoculars. In short, if you can view Saturn and Jupiter with the unaided eye, you should be able to spot Saturn’s rings and Jupiter’s four major moons with an optical aid.

The rings circle Saturn above Saturn’s equatorial plane. So when Saturn is at an equinox, we then see the ring’s edge-on from Earth. Saturn’s next equinox will take place on May 6, 2025. At and around that time, Saturn’s rings will appear as a thin line to the eye, or possibly even disappear from view.

By the way, Jupiter had its most recent equinox on May 2, 2021. That means we are viewing Jupiter’s equator pretty much edge-on this year. Because the orbits of the Galilean moons coincide with Jupiter’s equatorial plane, the moons of Jupiter tend to eclipse one another during a Jovian equinox year. Jupiter will swing to its next equinox on December 16, 2026.

Expect to see Jupiter’s moons lining up on or near the same plane all year long. Now and again, a moon or two could be “missing” as these moons flit in front of or behind Jupiter. This year, in 2021, it’s even possible for one moon to hide another moon.

From left to right, the four major moons of Jupiter: Io, Europa, Ganymede and Callisto. Earth’s moon is larger than Europa, and nearly the same size as Io. Ganymede, the largest moon in the solar system, is even larger than the planet Mercury. Callisto is the third-largest moon in the solar system, a touch smaller than Saturn’s Titan. Photo via JPL/NASA.

To find out the position of Jupiter’s moons for right now or some chosen time, click on this interactive tool via Sky & Telescope.

The outermost Galilean moon – Callisto – is the only one of Jupiter’s four major moons not to swing in front of and in back of Jupiter during each orbit around the king planet. At a Jovian solstice, Jupiter’s rotational axis is most inclined toward Earth. Centered on a solstice, Callisto swings to the north and south of Jupiter, as seen from Earth, for a few years. Jupiter’s last solstice occurred on April 27, 2018, and will next happen on January 20, 2024.

These next several mornings – May 30 to June 2, 2021 – use the moon to guide you to the bright planets, Saturn and Jupiter.