Moon and Taurus before dawn August 23-25

Unless you’re a night owl, you probably won’t see the moon and the constellation Taurus the Bull climbing up into your sky before your bedtime. Your best view will be before dawn, or before the beginning of astronomical twilight, on August 23, 24 and 25. That’s because the moon and Taurus climb highest up just before daybreak.

The chart at top is designed for mid-northern North American latitudes. Even so, the moon will still be passing in front of this constellation as seen from around the world. Before dawn on these dates in the world’s Eastern Hemisphere – Europe, Africa, Asia, Australia and New Zealand – look for the moon to be offset toward the previous date. The farther east you live, the greater the offset.

On the morning of August 23, the moon is at or near its half-illuminated last quarter phase, as it passes to the south of the Pleiades star cluster. The following day, August 24, finds the moon sweeping to the north of Aldebaran, the brightest star in the constellation Taurus.

The lit side of a waning moon always points eastward, or in the moon’s direction of travel through the constellations of the zodiac. Relative to the backdrop stars, the moon travels eastward at the rate of about 1/2 degree (the moon’s own angular diameter) per hour. Hence, from around the world, the moon will appear closer to the star Aldebaran on August 24 than on August 23. 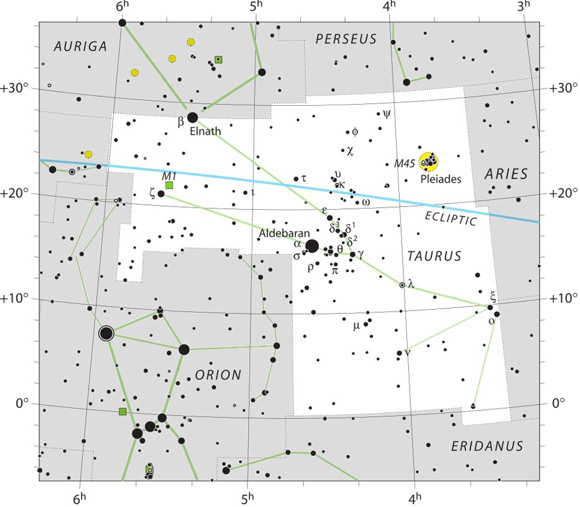 Aldebaran, the star depicting the eye of the Bull, crowns a V-shaped assemblage of stars that outlines the Bull’s face. Extend this starlit V upwards to Elnath, Taurus’ second-brightest star. Elnath marks the tip of the Bull’s northern horn. The fainter star at the tip of the Bull’s southern horn is Zeta Tauri. This 3rd-magnitude star, though rather faint, is easy to see on a dark, moonless night. We don’t see the this star, Zeta Tauri, on the feature sky chart at top because it’s covered over by the August 25th moon, but you can see it on the IAU chart of Taurus immediately above – or, below, where we remove the August 25th moon. 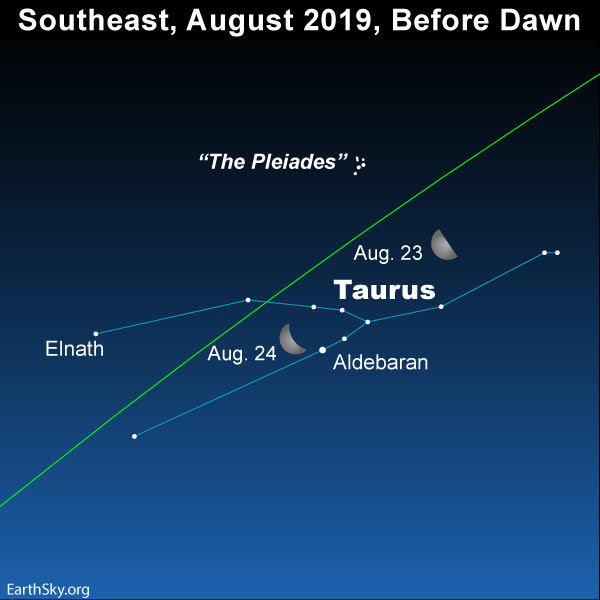 The star below Elnath, the northern horn star, is Zeta Tauri, the southern horn star. If you live along the West Coast of the U.S. and Mexico, you might be able to see an occultation of this star before dawn on August 25, 2019. 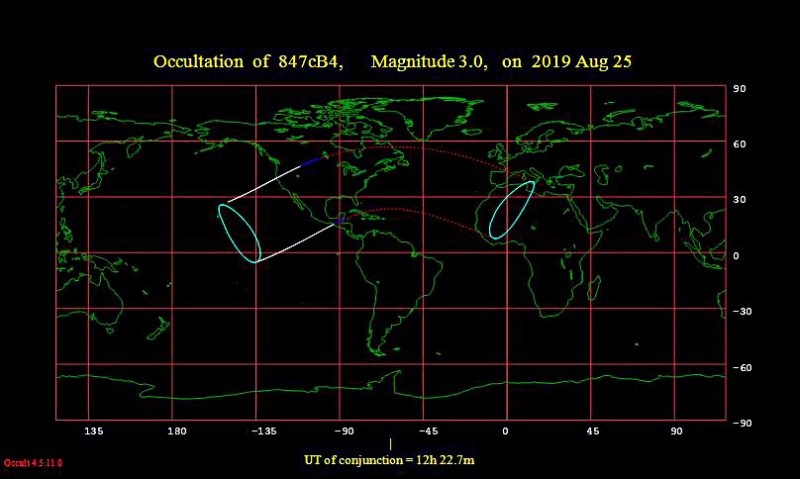 By the way, if you live along or near the Pacific Coast of the United States and Mexico, you can watch the moon occult (cover over) the star Zeta Tauri before dawn on August 25. Zeta Tauri will disappear behind the moon’s illuminated side and then reappear on the moon’s dark side.

We give the occultation times for two localities in local time:

Visit lunar-occultations.com to find out the occultation times for nearly 700 localities, but remember to convert from Universal Time to your local time. Here’s how.

Bottom line: Before dawn these next several mornings – August 23, 24 and 25, 2019 – watch for the waning moon to cross the constellation Taurus the Bull.