Moon and Spica on February 25

You’ll have to stay up late (or wake up early) to see the moon with the star Spica these next several nights. 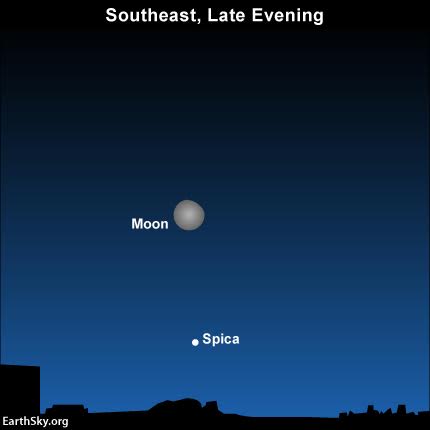 Tonight – February 25, 2016 – stay up late (or wake up early) to see the moon with the star Spica. And if you miss them tonight, try again over the next several nights. At mid-northern latitudes, the waning moon and Spica, the brightest star in the constellation Virgo the Maiden, climb up above the horizon by around 10 to 11 p.m. local time. At southerly latitudes in the Southern Hemisphere, the moon and Spica are up by mid-evening.

As the Earth spins eastward beneath the starry sky tonight, the moon and Spica will move upward and westward until reaching their high point for the night around 3 a.m. local time tomorrow, on February 26. Before daybreak, look for the moon and the star Spica to shine in the western half of sky.

The moon rises and sets an average 50 minutes later each day. On the other hand, the backdrop stars of the Zodiac rise and set about four minutes earlier daily. That’s why the moon and Spica shine together on the sky’s dome for only a few days of the month. 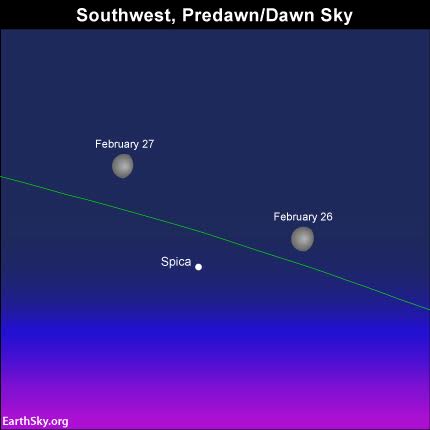 If you’re an early riser, getting up before sunrise, look for the moon and Spica in the western half of sky. 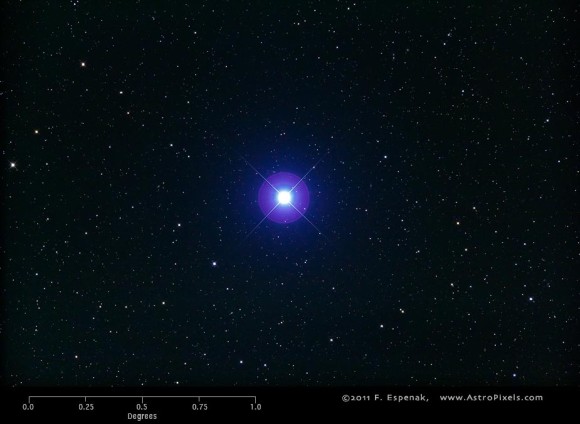 The star Spica is also called Alpha Virginis, because it is the brightest star in Virgo. Its color is distinctly blue-white, even to the eye. Photo by Fred Espenak. Read more about Spica at Fred Espenak’s website.

Bottom line: Either late this evening – February 25, 2016 – or in the wee hours before sunrise on February 26, see the waning moon paired up with Spica, the brightest star in the constellation Virgo.