Moon past full. How to see Neptune

Tonight – August 18, 2016 – the moon still appears very nearly full at sunset, but the instant of full moon came on the morning of August 18 at 9:27 UTC. For us in the mainland United States, this full moon instant was at 5:27 a.m. Eastern Time, 4:27 a.m. Central Time, 3:27 a.m. Mountain Time and 2:27 a.m. Pacific Time Thursday morning. That moon you see Thursday evening is actually a waning gibbous moon. All in all, the moon appears full to the eye for about three days around the exact moment of full moon.

Although you won’t see it, the planet Neptune is near the moon on this night. Neptune is the only planet that you absolutely can’t see without an optical aid – even on a dark, moonless night. However, on August 18, both the moon and Neptune will be in front of the rather faint zodiacal constellation Aquarius the Water Bearer.

Here are some tips to finding Neptune, once the moon moves away.

First, notice the stars near the August 18 moon. Use them to get a ballpark idea of where the constellation Aquarius and the planet Neptune reside on the sky’s dome.

Then look at the chart below: 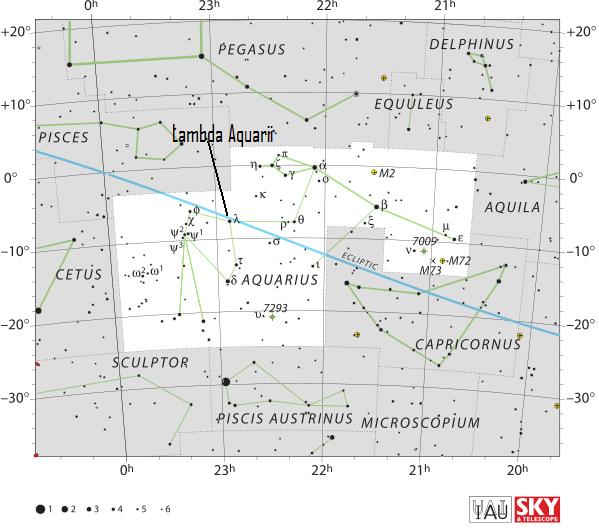 View larger. | This is the constellation Aquarius, with the star Lambda Aquarii highlighted. Find this star and then look for the planet Neptune with either binoculars or a low-powered telescope.

Once the moon drops out the evening sky, a few days after August 18, you can star-hop to Neptune via the constellation Aquarius and its star Lambda Aquarii.

To do it, you’ll need a chart and optical aid. You’ll find a couple of useful charts on these pages:

Uranus and Neptune through March 2017, from SkyandTelescope.com

Path of Neptune through 2023, from NakedEyePlanets.com