Moon, Mercury to meet up in Taurus 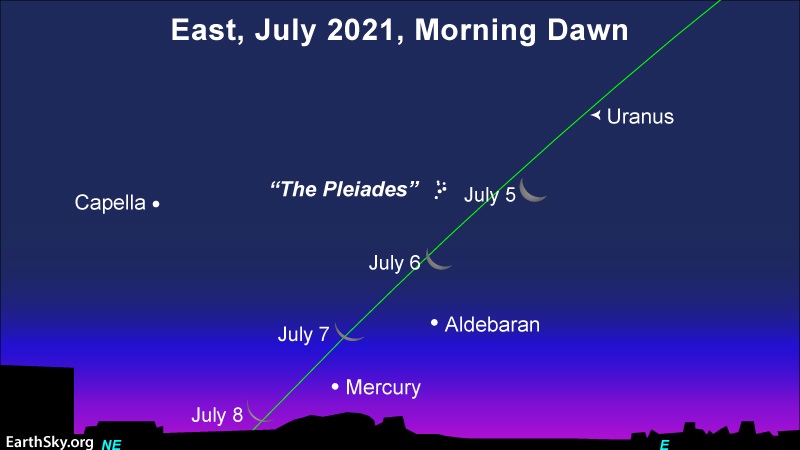 These next several mornings – July 5 to 8, 2021 – watch for the waning crescent moon to travel in front of the constellation Taurus the Bull. The moon’s position will change from day to day, as the shrinking crescent flits by the Pleiades star cluster, then the bright star Aldebaran, and then the bright planet Mercury.

Although Mercury is actually a touch brighter than Aldebaran, Aldebaran will probably be the easier of these two star-like objects to spot. That’s because Aldebaran rises before Mercury does, enabling you to view Aldebaran in a darker sky. Even when Mercury and Aldebaran are both above the horizon, Mercury will be sitting deeper in the glow of twilight, and likely harder to see. Remember, though, that the illuminated side of lunar crescent points to Mercury’s place near the horizon, and binoculars help out immensely in your hunt for Mercury!

We give you Mercury’s approximate rising time at various latitudes for the next several days, given an absolutely level horizon.

Find out Mercury’s specific rising time in your sky at Old Farmer’s Almanac or TimeandDate.com

At mid-northern latitudes, you will probably have to be up quite early, or at least 1 1/2 hours before sunrise, to view the glorious Pleiades cluster in a dark sky. In either the Northern or Southern Hemisphere, dawn’s first light (start of astronomical twilight) precedes sunrise a maximum amount of time at and around the summer solstice.

The sky doesn’t need to be quite as dark to see Aldebaran, the constellation Taurus’ brightest star, or Mercury, the innermost planet of the solar system. From most places worldwide, Aldebaran will rise before the start of astronomical twilight. We exclude far-northern temperate latitudes, where the midnight twilight allows for no true nighttime at this time of year.

Despite the lengthy morning twilight at northern temperate localities, mid-northern latitudes should still enjoy a fine view of the early morning sky. From around the world – except at far-northern latitudes – watch as the waning crescent moon swings by the Pleiades star cluster, the bright star Aldebaran and the bright planet Mercury.

Thank you! Your submission has been received!
Oops! Something went wrong while submitting the form.
END_OF_DOCUMENT_TOKEN_TO_BE_REPLACED