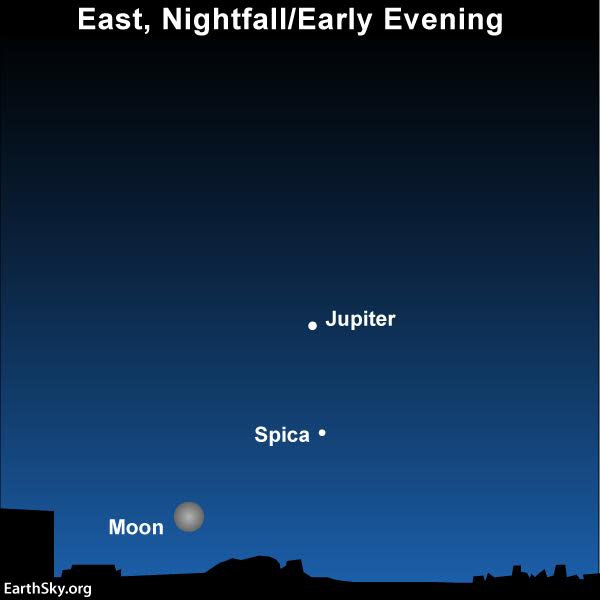 But no matter! The moon will look plenty full to the eye tonight from anywhere worldwide, as it follows the dazzling planet Jupiter and the star Spica across the nighttime sky from early evening until dawn.

If you’ve been watching, you know the moon moves eastward in our night sky. The featured sky chart at top shows the moon’s position relative to Jupiter and the star Spica as seen on the evening of April 11 from North America. As seen from the world’s Eastern Hemisphere – Africa, Europe and Asia – the moon is more offset toward Spica and Jupiter on the evening of April 11.

Do you have a telescope? Wait until Earth’s moon moves away, then try to view Jupiter’s four major moons through your ‘scope. Or try tonight, because you can often see these moons in a moonlit sky. In their outward order from Jupiter, the moons are Io, Europa, Ganymede and Callisto.

But, as viewed from Earth on successive evenings, their order will be seen to change.

This evening for North America on April 11, 2017, Ganymede and Europa will appear on one side of Jupiter, while Io and Callisto will be on the other. It’s possible that you won’t see Io right at nightfall because it’ll actually be in front of Jupiter. In that case, give it any look at later evening. For more details, follow Jupiter’s moons with this chart from skyandtelescope.com.

Bottom line: Whether you enjoy the simple beauty of Kepler’s third law or the visual beauty of the heavens – or both – let the waxing gibbous moon be your guide to the planet Jupiter on the night of April 11-12, 2017!

Thank you! Your submission has been received!
Oops! Something went wrong while submitting the form.
END_OF_DOCUMENT_TOKEN_TO_BE_REPLACED