From some places worldwide, the moon will cover Aldebaran for up to an hour. The rest of us get an awesome view of this bright star right next to the moon. 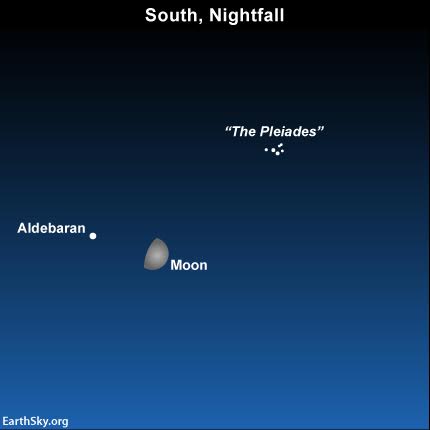 Tonight – February 15, 2016 – the moon shines close to the star Aldebaran, brightest light in the constellation Taurus, for a portion of the night. The sky chart above shows the moon and Aldebaran as twosome appears at mid-northern North American latitudes on the evening of February 15.

Their closeness to one another will vary worldwide, but even so, Aldebaran will be the closest bright star to the moon on this night, no matter where you are on the globe.

In fact, if you’re in just the right place, you can actually watch the moon occult – pass in front of – Aldebaran. Aldebaran will disappear behind the dark side of the waxing gibbous moon and reappear on the moon’s illuminated side.

Tonight’s occultation is visible in its entirety during the nighttime hours from much of the Pacific Ocean and Hawaii. The far West Coast of the United States sees only the beginning of the occultation because Aldebaran will set before the occultation ends. We give the occultation times for two localities in local time, so no time conversion is necessary: 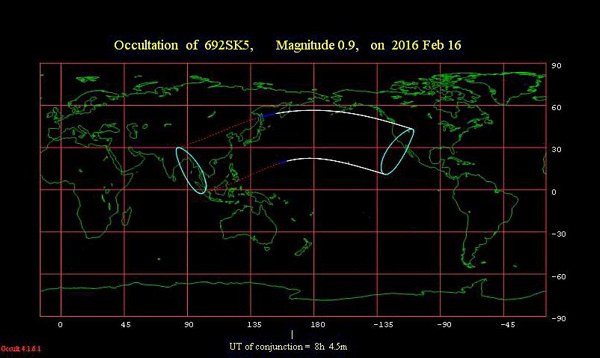 View larger. The area of the globe in between the solid white lines has the occultation taking place during the nighttime hours. For the West Coast of the United States, the occultation begins very shortly before Aldebaran sets. Map via IOTA

The occultation also takes place during the daylight hours on February 16 in southeast Asia, China and Japan. The International Occultation Timing Association (IOTA) gives the occultation times for numerous localities in Universal Time. Click here to find out how to convert Universal Time to your local time.

This ruddy star depicts the Bull’s eye in the zodiacal constellation Taurus the Bull. Can you see its reddish color in the moon’s glare?

After the initial occultation on January 29, 2015, each subsequent occultation will occur farther and farther south on Earth’s globe, until reaching its southernmost point midway through the occultation series. The southernmost lunar occultation of Aldebaran will happen on August 25, 2016. Only far-northern regions of the Southern Hemisphere near the equator will be able to witness this southernmost occultation. Then the series will move northward again, until the concluding occultation in the Arctic regions on September 3, 2018.

Bottom line: Enjoy the close pairing of the moon and star Aldebaran – brightest light in Taurus the Bull – on the night of February 15, 2016.