Tonight’s waxing moon arcs to north of the constellation Orion, and south of the ecliptic. 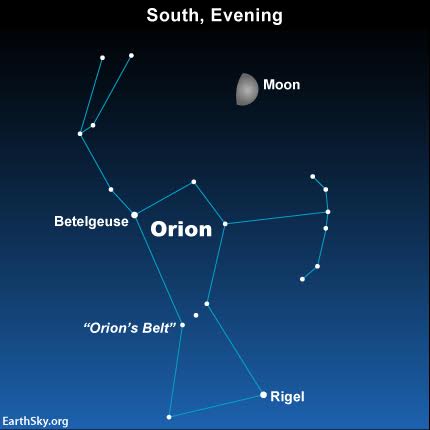 Tonight – February 16, 2016 – the waxing gibbous moon will be shining to the north of the constellation Orion the Hunter. At the same time, the moon will be south of the ecliptic – the sun’s annual path in front of the backdrop stars. The sky chart below helps to illustrate. 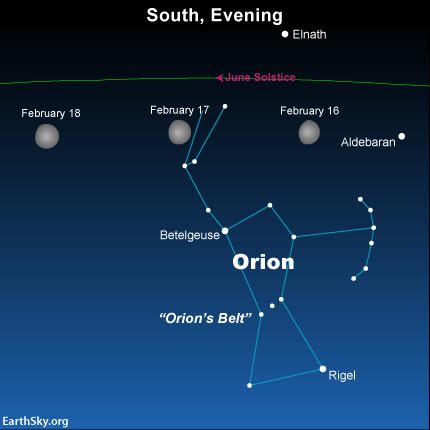 In the year 2016, the moon in its monthly travels moves to the north of Orion yet to the south of the ecliptic. 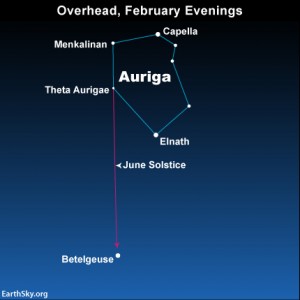 From northerly latitudes, you can use the constellation Aurgia to star-hop the June solstice point about midway between the star Betelgeuse and the star Theta Aurigae.

This evening, you can envision the ecliptic arcing to the north of Orion with the mind’s-eye. As seen from our northerly latitudes, the ecliptic arcs way up high above Orion in our southern sky. But from temperate latitudes in the Southern Hemisphere, the moon and ecliptic loom rather low in the northern sky, below an “upside-down” Orion.

However, since the moon reaches its northernmost point on the sky’s dome once every month (and sometimes twice), you can often watch the moon as it passes to the north of Betelgeuse during its monthly journey through the constellations of the Zodiac. Depending on the year, the moon can swing anywhere from 5o north to 5o south of the June (northern) solstice point (to the north of Betelgeuse). Incidentally, the moon at its northernmost point is sometimes called a northern standstill – the equivalent of the northern solar solstice in June.

This year, 2016, is a continuation of the minor lunar standstill year that started in 2015. During this yearly period, the moon at its northern standstill point swings maximally south (about 5o) of the June solstice point. (See sky chart near the top of this post.) Because the sun at its northern solstice point reaches a declination of about 23.5o north of the celestial equator, the moon’s monthly northern standstills swing to a maximum of about 18.5o north (23.5o – 5o = 18.50) during this minor lunar standstill period.

The major standstill year of 2025, in stark contrast, will find the the moon swinging about 5o north of the June solstice point every month. Thereby, the moon’s monthly maximum reaches a northern declination of about 28.5o north (23.5o + 5o = 28.50) throughout the year 2025. The sky chart below, for February 2025, highlights the moon’s northerly path during a major standstill year. 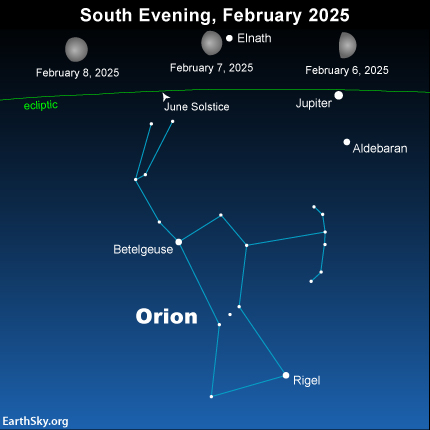 During the major lunar standstill year of 2025, the moon in its monthly travels will swing to the north of the ecliptic and the June solstice point.

Bottom line: Watch for the waxing moon. On the evening of February 16, 2016 – and for a few nights afterwards – it arcs north of the constellation Orion and south of the ecliptic.