Moon and Scorpius on August 25 and 26 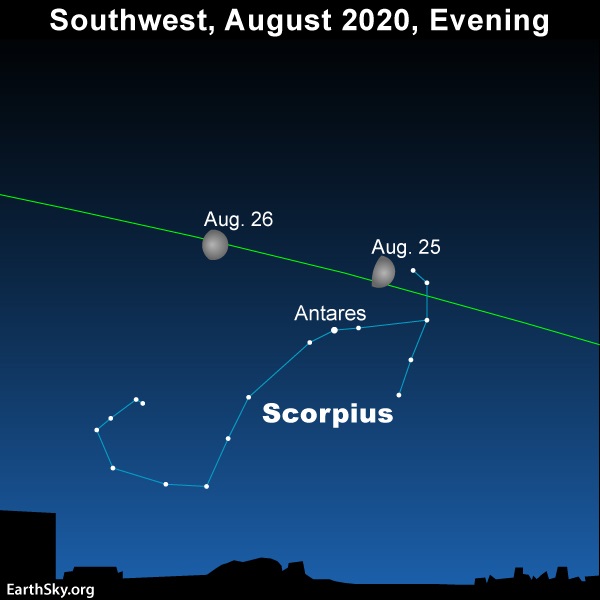 As darkness falls on August 25, 2020, the moon will be at or near its half-illuminated first quarter phase, and close to the star Antares on the sky’s dome. The next night – August 26 – the moon will be farther from Antares, and closer to the graceful curved tail of Scorpius the Scorpion, the constellation in which Antares is the brightest star.

Of course, the moon and these stars are not truly close together in space on these nights. The moon, our closest celestial neighbor, resides at a average distance of 238,885 miles or 384,400 km; yet the sun, our nearest star, lodges some 400 times farther from Earth than our moon.

Antares, the brightest star in the constellation Scorpius the Scorpion, represents the Scorpion’s beating heart. This red gem of a star is truly enormous, with a radius in excess of 3 astronomical units. If by some bit of magic Antares were suddenly substituted for our sun, the surface of the star would extend well past the orbit of Mars!

Bottom line: The moon sweeps close to red supergiant star Antares on August 25, 2020. The next night, August 26, the moon is closer to the graceful curved tail of Scorpius the Scorpion, the constellation in which Antares is the brightest star.