Moon and Mars on June 16 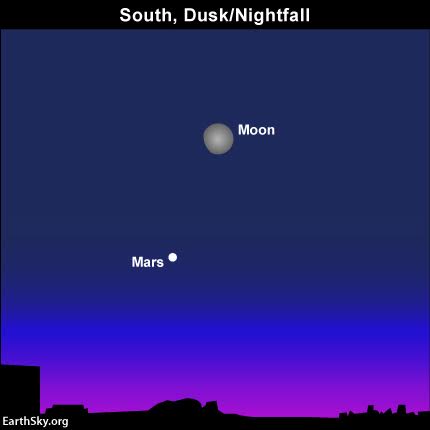 Tonight – June 16, 2016 – look for the bright waxing gibbous moon first thing after sunset. As dusk gives way to darkness, watch for the red planet Mars to pop out in the moon’s vicinity. Because Mars shines so brightly in Earth’s sky in June 2016, we expect this world to withstand tonight’s drenching moonlight and to be a spectacular sight near the moon.

At nightfall, watch for the planet Saturn and the star Antares to join up with the moon and Mars on this moonlit night. Both Saturn and Antares are respectably bright but neither comes close to matching the brilliance of Mars. Look for Mars to outshine Saturn, and for Saturn to outshine Antares, the brightest star in the constellation Scorpius the Scorpion. At present, Mars shines 5 times more brightly than Saturn, and about 12 times more brightly than Antares. 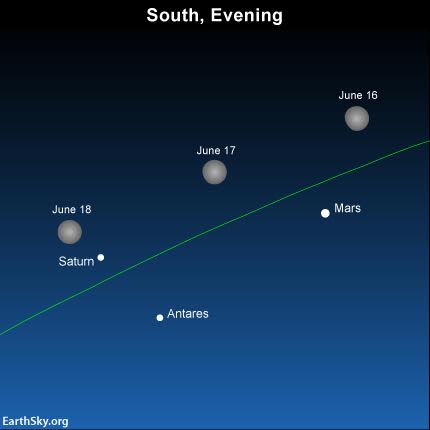 Watch the brilliant waxing gibbous moon swing by the planets Mars and Saturn, plus the star Antares, on June 16, June 17 and June 18.

Of course, Mars and Saturn are planets, so these worlds shine by reflecting the light of the sun. Antares, on the other hand, is a star shining by its own light.

For our purposes, we can regard Antares as a steadfast 1st-magnitude star; that is, it’s one of the sky’s brightest stars. Strictly speaking, though, this star’s magnitude is very slightly variable.

Mars and Saturn are planets and so shine with reflected sunlight. As seen in Earth’s sky, the brightness of Mars, fourth planet outward from the sun, varies much more greatly than the brightness of Saturn, sixth planet outward. But that’s not an intrinsic difference in Mars’ brightness. It’s based on Mars’ distance from us, and also something called opposition surge. Mars at its most distant point from Earth lies some 7 times farther away than at Mars at its closest. Mars was closest on May 30, 2016, and that’s why it’s still so bright in our sky. At its brightest, Mars shines some 50 times more brightly in our sky than it does at its faintest.

Saturn, the farthest world that we can easily see with the unaided eye, lies only about 1.4 times more distant from Earth at its farthest point than at its closest point. Saturn at its brightest is about 5 times brighter than at its faintest.

But Saturn’s brightness is determined not only by its distance, but also by the angle of tilt of its highly reflective rings with respect to Earth. Saturn’s greatest brilliancy in our sky happens when Saturn is closest to Earth and its rings are maximally titled our way. This last happened during the opposition of December 31, 2003, and will next happen at the opposition of December 24, 2032.

By the way, Jupiter’s variation in brightness is less than that of either Mars or Saturn. Jupiter is about three and one-half times brighter at its brightest than at its faintest.

On June 16, 2016, use the moon to find Mars, whose variation in brilliance far exceeds that of any other bright planet orbiting the sun outside Earth’s orbit. Besides Mars, the other two bright superior planets are Saturn and Jupiter.

Three planets light up the June 2016 evening all month long. The green line depicts the ecliptic – the sun’s yearly path in front of the constellations of the zodiac.

Bottom line: The bright red object near the moon on June 16, 2016, is Mars. Why it’s still so bright and a word about the highly variable brightness of this neighboring world.