Moon and Aries on February 21 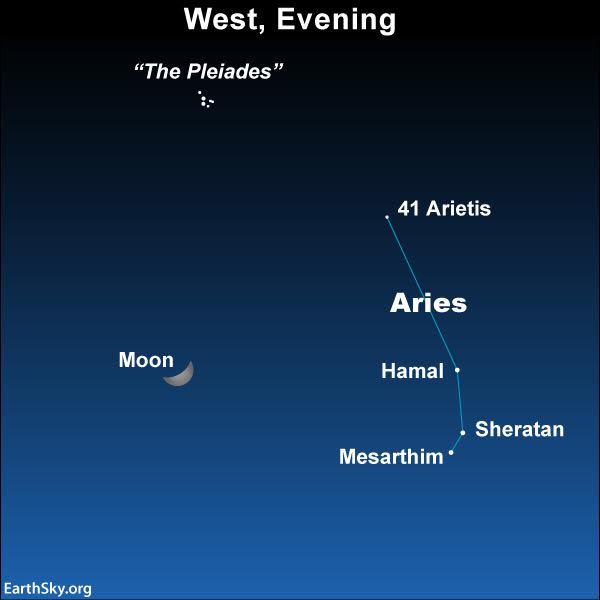 Tonight – February 21, 2018 – use the waxing crescent moon to find the relatively faint constellation Aries the Ram. The moon is riding along the southern border of this constellation tonight, so seek for the major stars of Aries to the north (or right) of tonight’s moon. The only prominent part of this constellation consists of the three stars that make up the head of Aries. In their order of brightness, the stars outlining the Ram’s head are Hamal, Sheratan and Mesarthim.

The Ram’s hindquarters are marked by the star 41 Arietis, which is almost – but not quite – in line with the Ram’s two brightest stars, Hamal and Sheratan. The Ram is often portrayed as looking over his shoulder, admiring the Pleiades star cluster or perhaps his own Golden Fleece.

The ecliptic on the above chart depicts the pathway of the sun in front of the constellations of the zodiac. Yearly, from about April 18 to May 13, the sun passes in front of Aries the Ram, at which time of year Aries is lost in the light of the sun.

Click here to see a pictorial display of the moon’s position in front of the zodiac and relative to the ecliptic for right now or any given date.

Bottom line: Tonight – February 21, 2018 – watch the waxing crescent moon light up the evening sky as it dances along the southern boundary of the constellation Aries the Ram.

Thank you! Your submission has been received!
Oops! Something went wrong while submitting the form.
END_OF_DOCUMENT_TOKEN_TO_BE_REPLACED