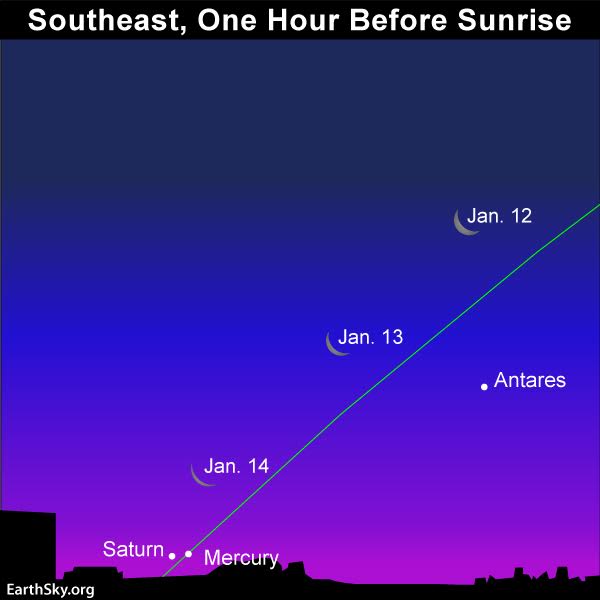 The planets Mercury and Saturn are in conjunction on January 13, 2018, with Mercury passing some 0.7o south of Saturn. For reference, the moon’s diameter spans about one-half degree (0.5o) of sky. By coincidence, the moon is near the planets on these mornings. Great time to catch them!

Mercury will be the brighter of these two worlds.

One caution: Mercury and Saturn rise very shortly before the sun. So there is a narrow window for seeing them, before the dawn drowns them from view. Click here for recommended almanacs; they can give you the time of both sunrise and planet-rise in your sky.

No matter where you live, however, you’ll want an unobstructed horizon in the direction of sunrise. Keep you binoculars handy, because the viewing is sometimes murky near the horizon.

After their January 13 conjunction, Mercury will fall toward the sunrise day by day, while Saturn will climb upward, away from the glare of daybreak. Thus Saturn will adorn the morning sky for many months to come. Meanwhile, Mercury will transition out of the morning sky and into the evening sky as this inferior planet reaches superior conjunction on February 17, 2018.

Of course, Jupiter is the brightest starlike object in your morning sky. That’s true no matter where you are on Earth. And Mars is a short hop below Jupiter before dawn. Keep your eye on Saturn and Mars, and you’ll see these two planets edging closer and closer to one another over the next several months. Saturn and Mars will have their conjunction in early April 2018, with Mars swinging 1.3o south of Saturn on April 2, 2018.

Bottom line: The Mercury/Saturn conjunction is Saturday, January 13, 2018. Plus, on both Saturday and Sunday mornings, the moon will be pointing toward these planets near the sunrise.

Thank you! Your submission has been received!
Oops! Something went wrong while submitting the form.
END_OF_DOCUMENT_TOKEN_TO_BE_REPLACED