Remember to look for Fomalhaut

In most years, Fomalhaut appears solitary. In 2019, however, Fomalhaut has company in the evening sky. The bright planets Jupiter and Saturn are up there, too, pointing the way to Fomalhaut on the sky’s dome.

The chart at top is via Stellarium Online. It’s facing due south in the evening, from the Northern Hemisphere. Go to Stellarium for a view of your night sky.

Here’s one star you’ll want to come to know: Fomalhaut, a bright star in the constellation Piscis Austrinus the Southern Fish. Fomalhaut is visible from all but far-northern latitudes. It’s located in a region of the sky that contains only faint stars. For that reason, in most years, Fomalhaut appears solitary in the evening sky at this time of year. In 2019, however, Fomalhaut has company. The bright planets Jupiter and Saturn are up in the evening, too, pointing the way to Fomalhaut on the sky’s dome.

How can you find Jupiter and Saturn? Jupiter is easy. It’s the brightest starlike object visible in your sky after sundown. Saturn is fainter than Jupiter, but it’s also bright. Think about the path the sun travels during the day. This path is called the ecliptic. Both Jupiter and Saturn can be found along the sun’s path. Jupiter is the very bright one, and Saturn is located just to the east of Jupiter on the sky’s dome. Need more? Click here for EarthSky’s monthly planet guide.

Fomalhaut is south of the sun’s path, and even farther east than Saturn. From the Northern Hemisphere, at about 8 to 9 p.m., you’ll find Fomalhaut peeking out at you just above the southeast horizon. See it on the chart above? No other bright star sits so low in the southeast in the evening at this time of year. From this hemisphere, Fomalhaut dances close to the southern horizon until well after midnight on these autumn nights. It reaches its highest point for the night in the southern sky at roughly 11 p.m. local time (midnight daylight saving time). At mid-northern latitudes, Fomalhaut sets in the southwest around 2:30 to 3:30 a.m. local time (3:30 to 4:30 a.m. daylight saving time).

Visit the U.S. Naval Observatory site to find out precisely when Fomalhaut rises, transits (climbs highest up for the night) and sets in your sky.

Fomalhaut is a bright white star. In skylore, you sometimes see it called the Lonely One, or the Solitary One, or sometimes the Autumn Star. Depending on whose list you believe, Fomalhaut is either the 17th or the 18th brightest star in the sky. 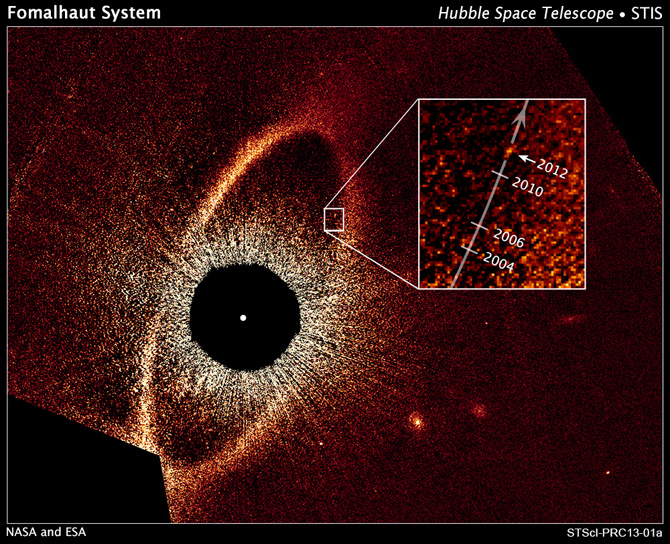 View larger. | This false-color composite image, taken with the Hubble Space Telescope, reveals the orbital motion of the planet Fomalhaut b, aka Dagon. Image via NASA/ESA/P. Kalas. Read more about Fomalhaut and Dagon.

Bottom line: Go outside around mid-evening, and learn to keep company with Fomalhaut – brightest star in the constellation Piscis Austrinus, the Southern Fish – sometimes called the loneliest star. In 2019, Fomalhaut has company. Both Jupiter and Saturn are near it in the sky.