Moon and Regulus rise mid-evening on January 12 and 13 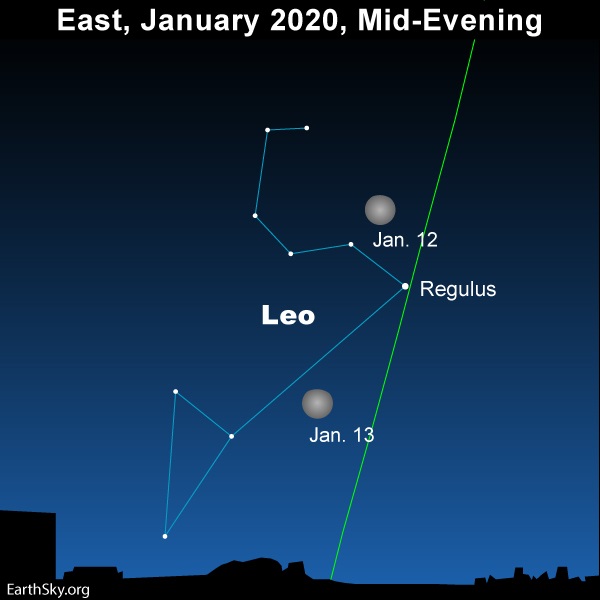 Before going to bed these next few evenings – January 12 and 13, 2020 – look in a general eastward direction to see the brilliant waning gibbous moon pairing up with Regulus, the brightest star in the constellation Leo the Lion. From most places worldwide, you won’t see the moon and Regulus right at nightfall because they’ll still be below the horizon.

The moon will be very near Regulus on the evening of January 12. But by January 13, the moon will have moved onward in its orbit so that you can see the prominent star pattern of which Regulus is a part. This pattern – not a constellation, but an easy-to-see asterism in our sky – has the shape of a backwards question mark. Regulus marks the bottom of the question mark. This pattern represents the Head and Shoulders of Leo and is called The Sickle.

Want to know when the moon will rise in your sky? Click on this Sunrise Sunset Calendar, remembering to check the moonrise and moonset box.

Want to know the moon’s present position in front of the constellations of the zodiac? Visit this Heavens-Above page.

Although Regulus ranks as a 1st-magnitude star and is the 21st-brightest star to light up the nighttime sky, you might have difficulty seeing Regulus in the lunar glare. If so, place your finger over the moon to block out its light and then seek for Regulus.

Or wait a few days for the moon to drop out of the evening sky. Then you can always use the pointer stars of the Big Dipper to help guide you to blue-white Regulus and the constellation Leo the Lion. It helps to have an inky dark night to see the starlit figure of the Lion.

At a distance of about 77 light-years, blue-white Regulus is a larger and hotter star than our sun. Although it looks like a single star to the eye alone, astronomers assure us that it’s actually a multiple star system, consisting of several component stars. Regulus spins once on its rotational axis in less than 16 hours, in contrast to our own sun’s spin rate at its equator of 24 days. If Regulus rotated much more rapidly, this star would rip apart! Astronomers suspect Regulus’ companions might be responsible.

Normally, a star’s blue-white color indicates that the star is in the heyday of youth (only 50 to 100 million years old). But Regulus has a very close companion star which cannot be seen through the telescope but only detected with a spectroscope. It’s thought that Regulus’ companion could be a white dwarf star, in which case Regulus and its companion star would have to be at least a billion years old. Possibly, mass transfer of material from one star to the other in this close-knit binary star system acts as a fountain of youth, keeping Regulus young in its old age.

Bottom line: On the evenings of January 12 and 13, 2020, use the moon to find Regulus, Leo’s brightest star. Once the moon drops out of the evening sky, use the Big Dipper to star-hop to Regulus and the constellation Leo the Lion.

Late May: Moon in Leo the Lion