Will you see the young moon? 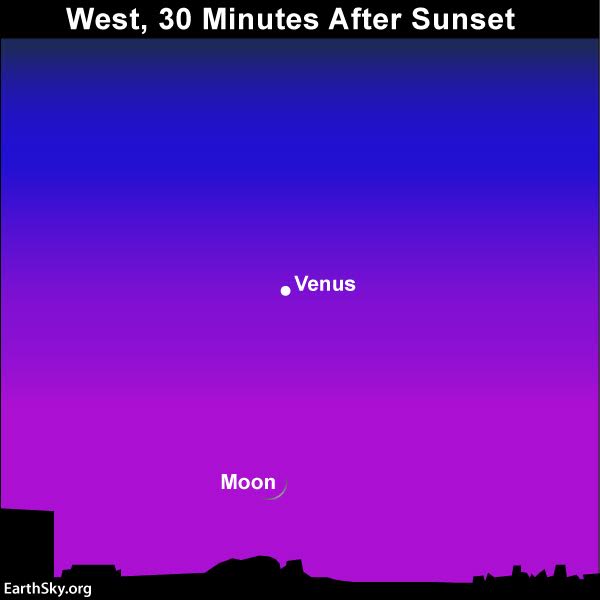 Tonight – April 16, 2018 – it won’t be easy to catch the young moon after sunset, but, if you do catch it, you’ll be glad. The April 16 moon will be a frail and pale whisker-thin lunar crescent – less than 24 hours old from many parts of Earth. Sky watchers in North America and islands in the northern Pacific have the best chance of seeing this exceedingly young and beautiful young moon.

If you do see the moon on April 16, you’ll find it low in the western twilight, beneath the brilliant planet Venus.

An older moon is easier to see … farther from the sunset, with more of its illuminated side showing.

From most of North America, the moon will plunge beneath the horizon less than one hour after sunset. Click here to find out when the moon will set in your sky, remembering to check the “Moonrise and moonset” box.

To find the young moon, find an unobstructed horizon in the direction of sunset Monday evening. Bring along binoculars, if you have them. Young moons can be elusive, but – if you have a clear sky all the way to the western horizon, and you’re in North America or on a northern Pacific island – you might catch it.

If you miss the young moon after sunset on April 16, look again on the evenings after that. A thin, but wider, waxing crescent will pair up more closely with Venus on April 17, as shown on the sky chart below. 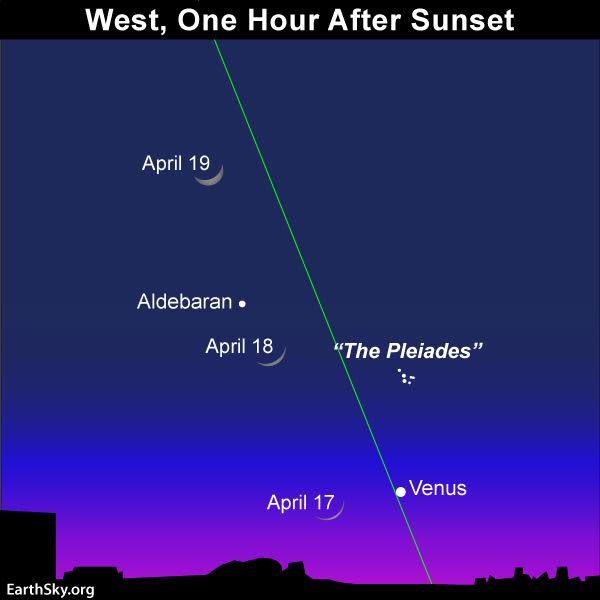 The moon will be climbing upward and staying out later in the days ahead. See the Pleiades cluster on this chart? This lovely little dipper-shaped cluster is up there, too, after sunset. If you can’t see it, sweep with your binoculars. Have fun!

Bottom line: We’ll be waiting to find out how many sky watchers catch the young moon on April 16, 2018! Tell us, in the comments below.