Full moon plus Jupiter on February 22

The full moon and the dazzling planet Jupiter – now nearly at its best for this year – will be together all night. Think photo opportunity! 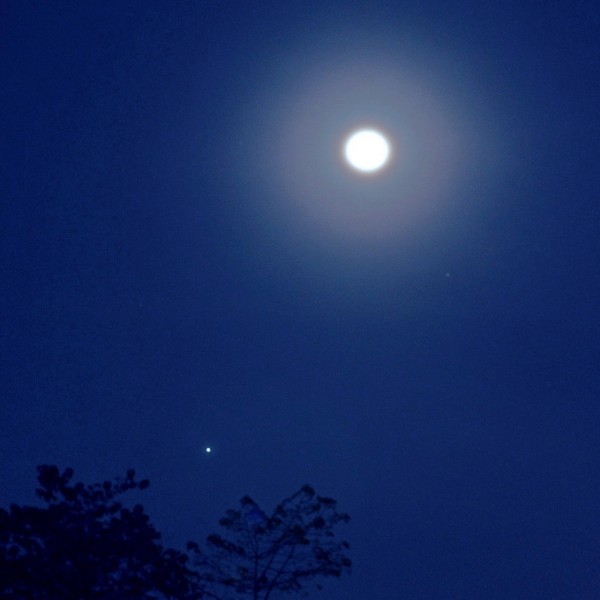 Full moon near Jupiter in 2014 via EarthSky Facebook friend JV Noriega in the Philippines.

Tonight – February 22, 2016 – no matter where you are on Earth, look for the February full moon! If you’re watching in early evening, you’ll see the dazzling planet Jupiter follow the moon into the eastern sky somewhat after nightfall, but by early evening.

In North America, we call the February full moon the Wolf Moon, Snow Moon or Hunger Moon. Watch as this February full moon climbs upward with Jupiter following it across sky throughout the evening hours. The moon and Jupiter will be high in the sky at and around midnight, and the brilliant twosome will descend westward in the wee hours before sunrise February 23.

If you’re up early tomorrow, on February 23, look for Jupiter over the moon in the western predawn/dawn sky. If you get a good photo, post it at EarthSky Facebook or submit your photo here.

Incidentally, that star above the moon and Jupiter this evening is Regulus, the brightest in the constellation Leo the Lion.

If you’re up early during the predawn hours on February 23, you’ll see Regulus below the moon and Jupiter. Throughout the night, as Earth spins beneath the sky carrying the moon and Jupiter westward, the moon is slowly but surely moving in its orbit around Earth, coming closer to Jupiter all the while as seen on our sky’s dome. By the time night falls again on the evening of February 23, the moon will have moved so far in its orbit that you’ll see the moon partnering more closely with Jupiter.

The moon will look full all night long tonight. However, astronomers regard the moon as full for only a fleeting instant – at the moment that the moon is most directly opposite the sun for the month. This full moon moment happens on February 22, 2016, at 18:20 Universal Time.

Photo top of post: JV Noriega in the Philippines 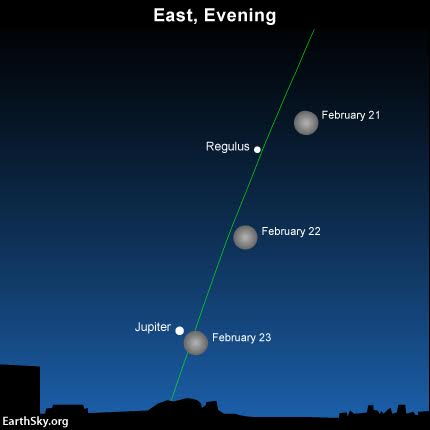 At the same time each evening, note that the moon moves eastward, toward the sunrise point on your horizon.

Bottom line: Don’t miss out on the great sky show on the night of February 22, 2016, as the February full moon and the dazzling planet Jupiter light up the nighttime from early evening until dawn!