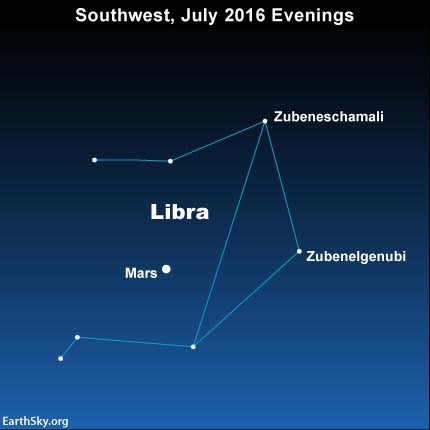 On July evenings, try finding two stars in the constellation Libra with the coolest of all star names: Zubenelgenubi and Zubeneschamali.

In July 2016, though, you’ll spot the red planet Mars shining in front of Libra, too, as shown on the chart at the top of this post.

Mars isn’t as bright as it was in May and early June, around the time we passed between it and the sun on May 22. But Mars is still noticeably bright and reddish in color!

Use Mars to help guide you to modestly bright Zubenelgenubi and Zubeneschamali tonight. 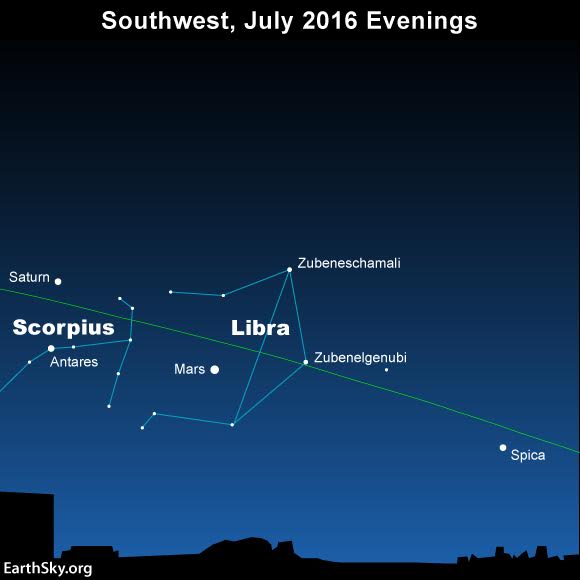 Bright star Spica is to the west of Mars and Libra. Planet Saturn and star Antares are to the east of Mars.

If you live at a mid-northern latitude – North America, Europe or Asia – you’ll see these Libra stars rather low in your south to southwestern sky at nightfall and early evening.

As seen from middle latitudes in the Southern Hemisphere – for example, in Australia – Libra’s stars shine close to overhead as darkness falls at this time of year.

In any year, look for Zubenelgenubi midway between Antares and Spica. Zubeneschamali lies about one fist-width from Zubenelgenubi. Hold your fist an arm length away. 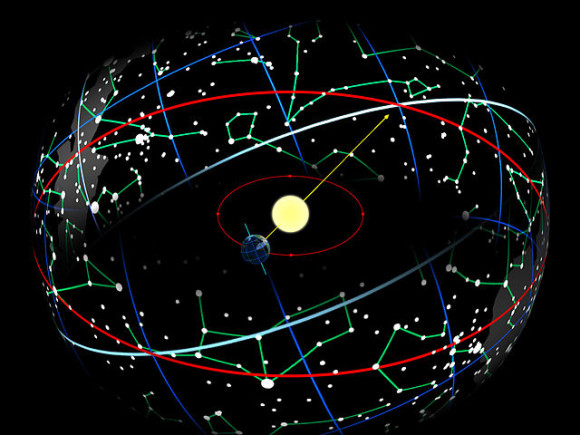 The path of the sun through the Zodiac via Wikimedia Commons.

Antares, Zubenelgenubi and Spica are stars of the Zodiac, or legendary Pathway of Animals that resides in our sky. This band around our sky marks the sun’s annual pathway in front of the backdrop stars. Nowadays, astronomers are more likely to speak of the ecliptic, which is more or less the same thing; the ecliptic is defined differently, as the plane of Earth’s orbit around the sun. Zodiac and ecliptic both mean a band around the sky, in front of which the sun travels throughout the year. If you could see stars during the daytime, you’d see the stars of the Zodiac. The sun sweeps near these stars, pairing up with Spica in middle October, Zubenelgenubi on or near November 7 and Antares on or near December 1.

Zubenelgenubi and Zubeneschamali were once seen in western culture as being part of the constellation Scorpius the Scorpion. They represented the Scorpion’s Claws. Zubenelgenubi and Zubeneschamali have been seen as a celestial Gateway in some cultures, because the moon and planets travel in between these Libra stars whenever they north of the ecliptic. Note that Saturn is north of the ecliptic, and in 2015, so is the moon when it makes its monthly rounds through the constellation Libra the Scales.