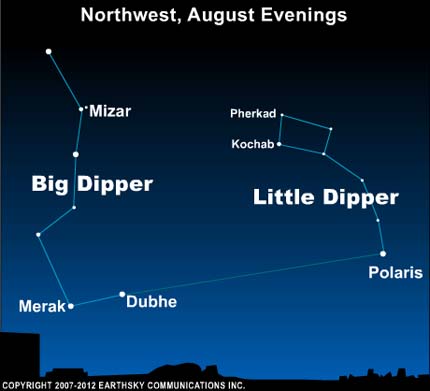 The 2 outermost stars in the Bowl of the Big Dipper always point to Polaris, the North Star.

Tonight, notice the two outer stars in the bowl of the Big Dipper – Dubhe and Merak. They always point to Polaris, the North Star. And Polaris is part of the Little Dipper. See these two famous star patterns tonight!

To find the Dipper at this time of year, look toward the northwest in the evening. The Big Dipper consists of seven moderately-bright stars, so it’s often visible on a moonlit night or from a light-polluted city.

If you have a dark night free of moonlight – like those coming up – you can see the eighth star of the Big Dipper. Look carefully at the second star from the end of the Dipper’s handle. With a dark sky and good eyesight, you’ll see that this star, Mizar, has a nearby companion, called Alcor.

Click here and check the moonrise and moonset box to find out when the moon rises in your sky.

Arabian stargazers referred to Mizar and Alcor as the “horse and rider.” These stars are a good test of the night’s viewing conditions: if you can’t see Alcor, there might be thin clouds up there.

These two stars are what’s called “naked-eye double star,” appearing double from our earthly vantage point. But do they orbit each other? Astronomers aren’t sure. The distances to these stars (as to most stars) aren’t precisely known. If Mizar and Alcor make up a true binary star, it’s a very wide one. If they do lie at the same distance from Earth, their separation is 0.27 light-years … that’s in contrast to eight light-minutes for Earth’s distance from our sun … or several light-hours for the distance to our sun of the most distant worlds in our solar system.

Still, it’s possible that Mizar and Alcor could be this far apart and still be orbiting one another, with a very long orbital period of three-quarters of a million years. 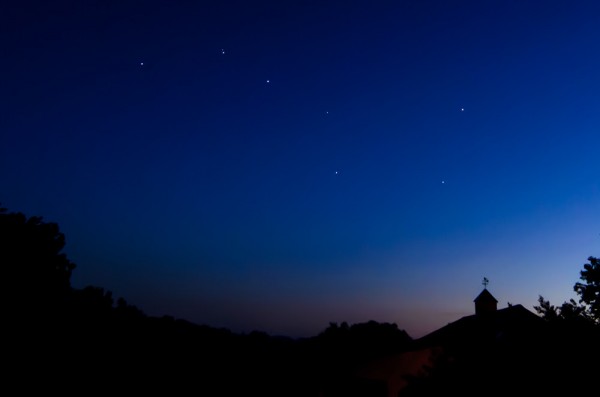 View larger. | Big Dipper before dawn in late June, 2015, by Hope Carter. If you view larger, you can see Mizar and Alcor, the famous double star in the Dipper’s handle.

Bottom line: Use the Big Dipper to find Polaris, the North Star. Also, notice the two stars Mizar and Alcor in the Big Dipper’s handle.