Perseus the Hero and a Demon Star

The star name Algol comes from the Arabic for “head of the demon.” Come to know this star, and point it out to your friends this Halloween. 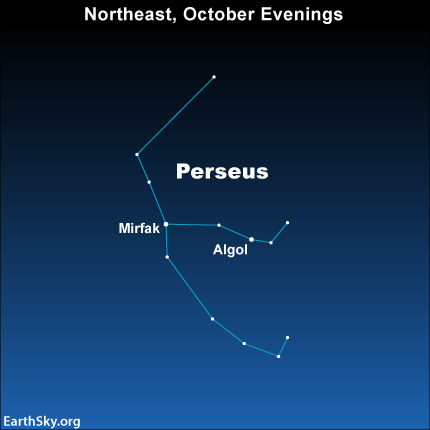 The star Algol in the constellation Perseus was given a name that means “demon star” by the early stargazers, because of its strange winking.

Tonight – just in time for the upcoming season of Halloween and the Day of the Dead – look for the Demon Star in the constellation Perseus the Hero.

That star is Beta Persei, or Algol, pronounced AL-gul. The name Algol comes from an Arabic term for head of the ghoul or head of the demon. This chart showed you how to use the constellation Cassiopeia to locate Perseus in the northeast in the evening sky. The brightest star in Perseus is Alpha Persei, whose proper name is Mirfak.

Algol is a very interesting star. It’s known to vary in brightness in a way that’s extremely regular. The cycle lasts exactly 2 days, 20 hours and 49 minutes. For a few hours during the cycle, Algol’s brightness falls far below normal, then returns to normal. All the while, the star remains visible to the eye.

Algol’s brightness variation is not due to some special quality of a single star. Instead, this is a multiple star system, where one star regularly passes in front of another as seen from our earthly perspective.

Thousands of these stars are known, but Algol is perhaps the most famous of this class because its periodic dip in brightness can be seen with the eye alone, and because the cycle is relatively short.

The ancient stargazers had no knowledge of multiple star systems, but possibly they did notice this star’s brightness change. Perhaps the brightness change is why, throughout parts of the ancient world, the star Algol was associated with demons or monsters. The Greeks and Romans identified the star with the Head of Medusa, a fearful monster with snakes in place of hair. The star has also been called the Ghoul Star.

High northern latitudes see Perseus by nightfall or early evening. Observers farther south may have to wait till mid-evening to catch Perseus and the Demon Star, aka Algol, in the northeastern sky.

Bottom line: The best-known star in the constellation Perseus is Algol, its name coming from the Arabic for head of the demon.