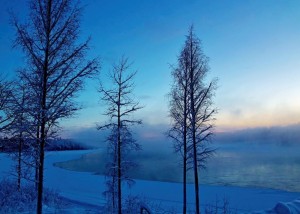 Lulea River in northern Sweden as seen by EarthSky Facebook friend Birgit Boden. She captured this image at sunset on February 3, 2013. It was about 3 in the afternoon.

Thank you! Your submission has been received!
Oops! Something went wrong while submitting the form.
END_OF_DOCUMENT_TOKEN_TO_BE_REPLACED