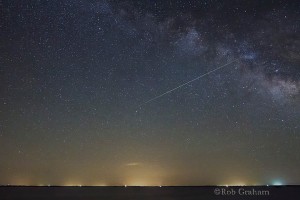 5/4/14, 3:30 am, central Kansas. I captured this meteor on Sunday morning, and I assume it is an early Eta Aquarids meteor. This morning (5/6) was the peak morning for the Eta Aquarids meteor shower, but I didn’t see that many meteors. I did see a couple more similar to this one, but they were out of frame.

Thank you! Your submission has been received!
Oops! Something went wrong while submitting the form.
END_OF_DOCUMENT_TOKEN_TO_BE_REPLACED