We expected 20-40 meteors per hour this morning, at the shower’s peak. But Eta Aquarid meteor rates in 2014 seem to have been far lower. Why? 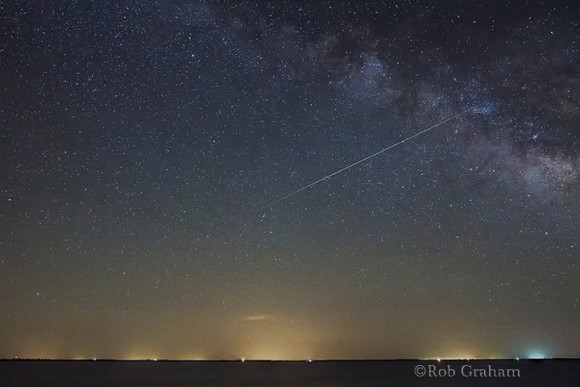 We expected 20-40 Eta Aquarid meteors per hour this morning, with the highest rates seen by those at tropical and southern hemisphere sites. But, based on the very few photos and reports at EarthSky Facebook – where a typical meteor shower yields a handful if not dozens of great meteor photos – we’ll venture to say that this year has been relatively poor for the Eta Aquarid meteor shower. Why? The International Meteor Organization (IMO), which has been tracking ZHRs, or zenithal hourly rates, of meteor showers for decades, offers this explanation:

IMO analyses in recent years, based on data collected between 1984–2001, have shown that ZHRs are generally above 30 between about May 3–10, and that the peak rates appear to be variable on a roughly 12-year timescale. Assuming this Jupiter-in?uenced cycle is borne-out, the next trough is due around 2014–2016, so ZHRs should be close to their relative poorest this year.

Apparently, from what we can see, this idea has been proven true for the 2014 Eta Aquarids!

Some people did catch photos of meteors. The photo above is by Rob Graham in Kansas. He wrote:

I captured this meteor on Sunday morning, and I assume it is an early Eta Aquarids meteor. This morning (5/6) was the peak morning for the Eta Aquarids meteor shower, but I didn’t see that many meteors. I did see a couple more similar to this one, but they were out of frame.

Mike Taylor in central Maine caught this next photo (below) on the morning of May 6. He wrote:

An Eta Aquarid fireball meteor with an impressive green tail streaks through the sky while I was capturing the reflections of the Milky Way and some trees in a local pond. I used an ISO setting of 4000 to collect as much light in the foreground reflections as possible. The orange hue on the horizon is light pollution in the light cloud cover. 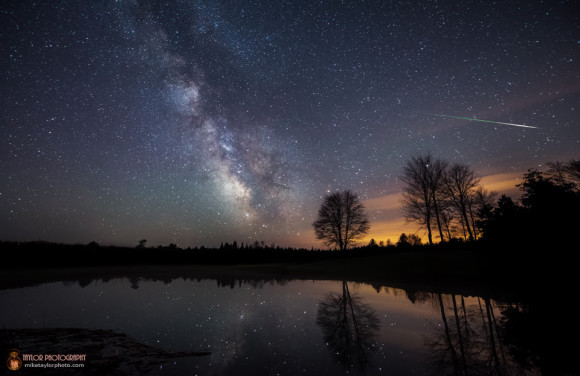 Mike O’Neal also caught an Eta Aquarid meteor this year, on the morning of the shower’s peak, May 6. See photo below. 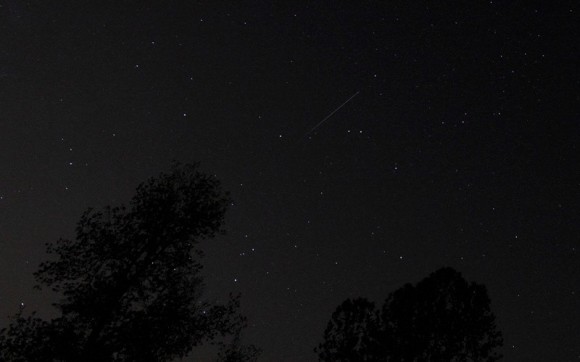 View larger. | Eta Aquarid meteor in 2014, captured on the morning of the shower’s peak, May 6, by Mike O’Neal.

Caught a faint one, did see some brighter ones also, was a beautiful morning for watching this a.m.

And, really, Mike’s description reminds us of why we watch meteors in the first place. As a wise man once said, meteor-watching is like fishing. You go outside. You enjoy the air and perhaps the company of friends, and the sights and sounds of nature. Sometimes you catch something!

Next up: Will Comet LINEAR produce a new major meteor shower in late May 2014?