Eclipse fans have gone to the various islands in Indonesia – in the Pacific – to watch the March 8-9, 2016 total eclipse of the sun. 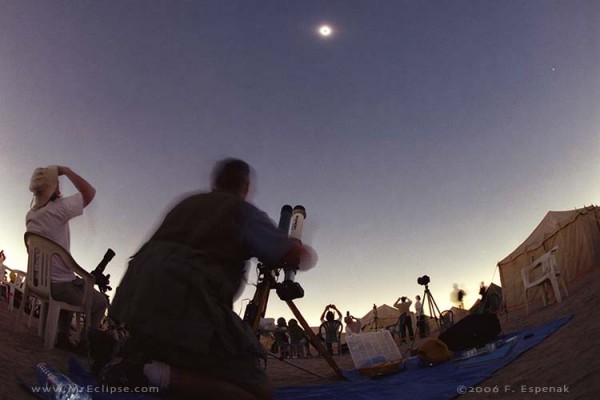 View larger. | Watching a total eclipse of the sun is a dramatic and awe-inspiring experience. Daylight turns to darkness, and nature falls under a hush. Then, for a few brief minutes, all attention is focused on the sky. This is a 2006 total solar eclipse, captured by eclipse master Fred Espenak. Read about the 2017 total eclipse visible from the U.S.

On March 8 or 9, 2016 (depending on your timezone), the sun, moon and Earth will temporarily form a straight line in space. The moon’s shadow will fall on Earth. Those within the shadow’s path – mainly over the waters of the Pacific Ocean – will see a total eclipse of the sun. At the March 8-9 eclipse, the best spots to watch this total solar eclipse from land are the various islands in Indonesia, which reside on the path of totality. Eclipse fans – many of whom have seen multiple total solar eclipses – are waiting now, preparing to watch the eclipse. If you could join them during the eclipse, you’d experience what you see in Fred Espenak’s photo above … and, of course, much more.

A much larger swath of the world gets to see varying degrees of a partial solar eclipse. Hawaii and Alaska see the partial eclipse at late afternoon on March 8, while south and eastern Asia, Korea, Japan, north and western Australia see it on the morning of March 9. That’s not nearly as dramatic … but also very interesting and beautiful.

EarthSky is in the midst of its annual crowd-funding campaign! We’re excited and 67% of the way toward our goal! Click here to learn EarthSky’s history and goals.

Bottom line: A photo by eclipse expert Fred Espenak of a group watching a 2006 eclipse.