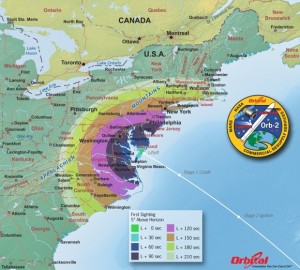 Orbital 2 Launch from NASA Wallops Island, VA on July 12, 2014- Time of First Sighting Map
This map shows the rough time at which you can first expect to see Antares after it is launched on July 12, 2014. It represents the time at which the rocket will reach 5 degrees above the horizon and varies depending on your location . We have selected 5 degrees as it is unlikely that you’ll be able to view the rocket when it is below 5 degrees due to buildings, vegetation, and other terrain features. As an example, using this map when observing from Washington, DC shows that Antares will reach 5 degrees above the horizon more after than a minute. Credit: Orbital Sciences

Thank you! Your submission has been received!
Oops! Something went wrong while submitting the form.
END_OF_DOCUMENT_TOKEN_TO_BE_REPLACED