Congratulations to the Orbital-2 mission for a successful launch today! 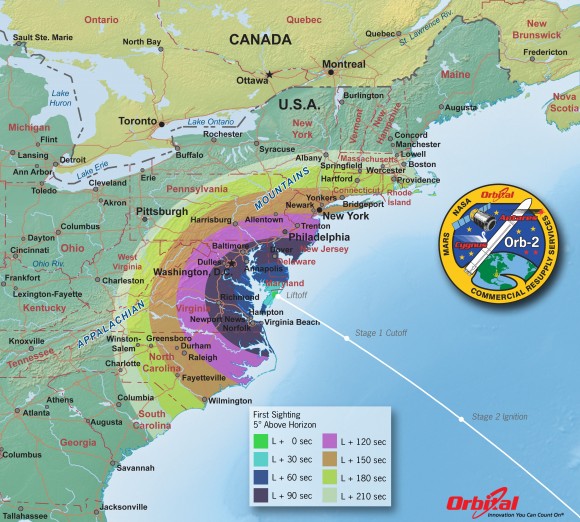 The Orbital-2 (Orb-2) mission launched successfully this morning (July 13, 2014) via the commercial Antares rocket from NASA Wallops Island, Virginia. @NASA_Wallops had said on Twitter this morning:

This map – from Orbital Sciences Corporation – shows the rough time at which those in the U.S. Northeast can first expect to see the Orbital-2 launch today in the sky. It represents the time at which the rocket will reach 5 degrees above the horizon and varies depending on your location. Orbital Sciences said it selected 5 degrees as it is unlikely that you’ll be able to view the rocket when it is below 5 degrees due to buildings, vegetation, and other terrain features. As an example, using this map when observing from Washington, DC shows that Antares will reach 5 degrees above the horizon more after than a minute.