When it returned to our sky in late August, Comet ISON wasn’t as bright as many hoped it would be. Does that mean we will or won’t see the comet? 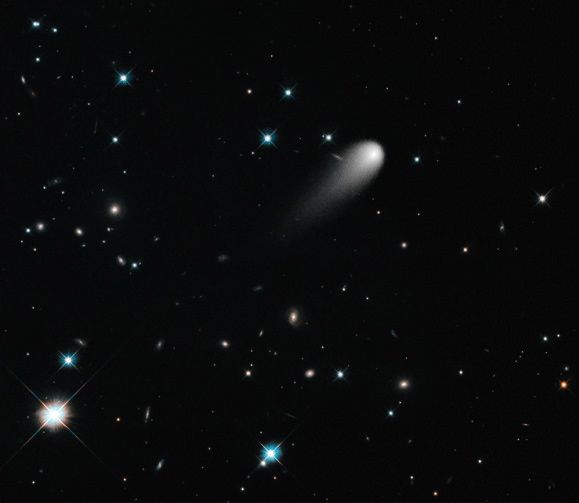 Comet ISON as captured by the Hubble Space Telescope on April 30, 2013. Image via NASA, ESA, and the Hubble Heritage Team (STScI/AURA)

Here is 2013’s most fascinating comet, as it was seen in April by the Hubble Space Telescope. Discovered in 2012, Comet C/2012 S1 (ISON) was heralded at first as a comet of the century. Some said it would appear many times brighter than the full moon by late 2013. However, when the comet returned to our sky in August 2013 – after being behind the sun from Earth during June and July – it was not as bright as many hoped it would be. Now some are already writing off Comet ISON, using words like dud. How the mighty have fallen.

But the fact is that – while we can’t expect Comet ISON to be a comet of the century – we might still have a visible comet in the sky before 2013 ends, one we can see with the eye alone, perhaps with a long comet tail. And that would be wonderful!

No one knows yet.

And that’s why we’re waiting for Comet ISON.

Click here for a month-by-month viewing guide to Comet ISON.

Click here for a video about the comet, from an experience comet watcher.

Click here to learn more about this image, from HubbleSite.