Spacecraft surfs in and out of Venus atmosphere

ESA’s Venus Express spacecraft spent a month surfing in and out of the atmosphere of Venus, coming so close that atmospheric drag caused the craft to slow down. 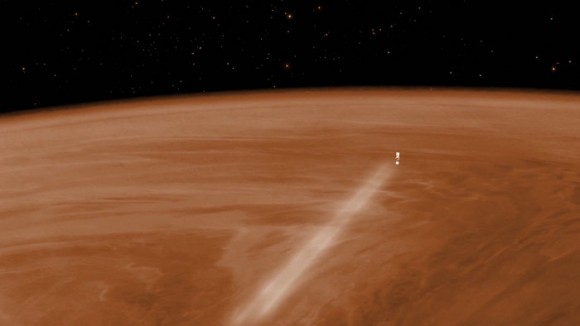 The European Space Agency’s Venus Express spacecraft has now been boosted back into a higher orbit following a month of maneuvers that let the craft venture so near Venus that it was aerobraking, or slowing down due to drag from the planet’s thick atmosphere. During the experiment, from June 18 to July 11, the spacecraft was orbiting above Venus’ thick atmosphere at an altitude of around 130 km (about 80 miles).

The maneuver was tried after eight years of orbiting Venus, with the craft’s propellant running low.

ESA says Venus Express will now resume its more normal Venus observations, at a more normal distance from Venus, for at least a few more months. Normal operations carry the craft around Venus in an elliptical orbit every 24 hours, taking it from 66,000 km over the south pole down to around 250 km at the north pole, just above the top of the atmosphere.

The experiment directly explored previously uncharted regions of the atmosphere, while also providing information on how a spacecraft responds when encountering the tenuous upper reaches of an atmosphere at high speed. And apparently Venus Express survived the experience well. Joerg Fischer, Venus Express operations engineer, commented:

The spacecraft has proven to be very robust and has apparently experienced no substantial degradation in any area, but a detailed evaluation is still to take place.

Read more about the Venus Express aerobraking experiment from ESA