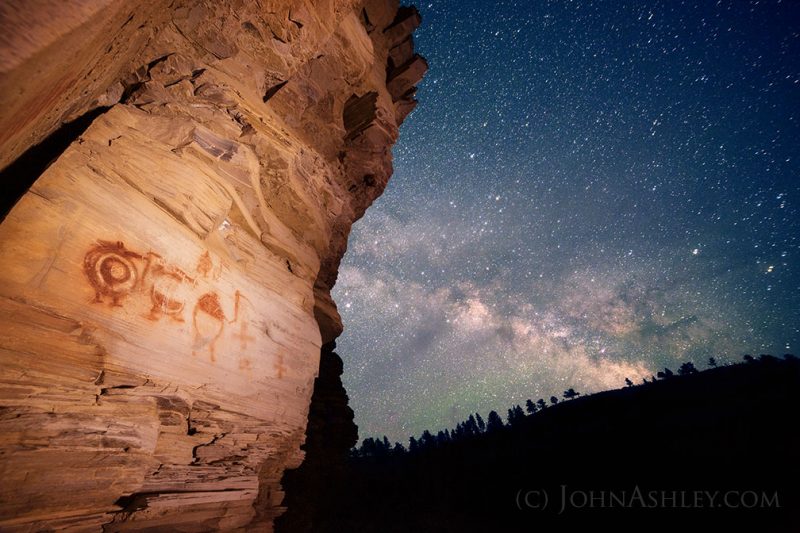 John Ashley captured the photo above at Bear Gulch in central Montana on June 4, 2016. He wrote:

I was recently humbled to spend a moonless night in a central Montana canyon, following in the faded footprints of mysterious Native American shamans and vision questers who recorded their stories in the form of rock art pictographs and petroglyphs. In this panel, seven shield-bearing warriors stand guard below the rising Milky Way.

Some interesting clues to this story. The large shield size (knee to shoulder) pre-dates the arrival of horses (in roughly 1720), when all horse-owning tribes switched to smaller shields that could be carried at a full gallop. Several warriors carry maces, and the left-most warrior is wearing a wolf hat headdress. The crosses (right) are the warrior shield designs of faded pictographs, and the top two warriors are much smaller than the lower ones.

The Native American rock art drawings in this central Montana location date from 1000 B.C. to 1850 A.D., with this panel dating between 1400 and 1700 A.D. This concentrated site features 483 shielded warriors, among other designs, and rivals better-known archaeological sites in the west.

It’s located on a privately-owned ranch, and the family has protected the site now for three generations. They have made it available for archaeological study, and they hope that it will someday become a state or national park but, unfortunately, the current political climate doesn’t allow for acquisition of new public lands.