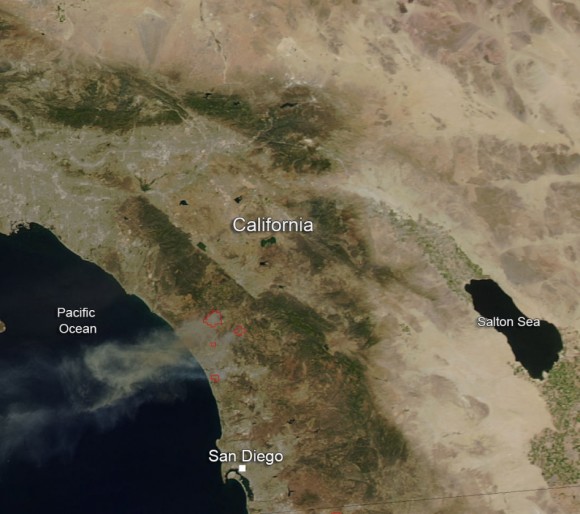 The single fire that ignited and split into nine separate fires still blazes in Southern California today. Firefighters are hoping for a break today (Thursday, May 15, 2014) but it doesn’t look like luck may be on their side. Conditions continue to be bone dry with unseasonal heat (98-106 degrees) and the Santa Ana winds are kicking up and allowing these fires to easy jump fire lines. This particular fire started on Wednesday as a single fire and within a day is now nine separate fires which have burned close to 10,000 acres. These fires are threatening more than just landscape in San Diego county, they are also threatening homes, universities, a military base and a nuclear power plant.

Day Two of the fires have seen them already destroying dozens of homes and forcing tens of thousands to evacuate. Camp Pendleton has also been partially evacuated due to the blazes as has the popular amusement park, Legoland. The Governor of California has declared a state of emergency. Thousands of firefighters are battling the flames both on the ground and in the air. Seven tankers and 20 military aircraft are also assisting the firefighters with their mission.

Temperatures soaring over 100 degrees coupled with 30 mph wind gusts have severely hampered the efforts, however, and fire tornadoes have broken out. Fire tornadoes are caused by crosswinds that create a vortex and produce winds that twist and swirl just like a tornado but with flames that coil upwards in the center of the twister creating a terrifying specter.

Although there is no chance of rain in the area for the next several days, the temperatures will start to subside on Friday and into the weekend. Winds are also expected to start to subside, giving firefighters that break that they so desperately need.